So they brought it back.  Just saw it while i was surfing in an ad.  I had heard rumors but nothing confirmed.  Even my own brother a Mello Yello addict didn't tell me.  Now here's the bummer.  It's not available in Alaska, or the whole west coast or the east coast for that matter.  I guess that the only dependable drinkers of Mello Yello are in the mid west of the country.  Come on COKE!!! I like Mello Yello better than Mountain Dew!! I was bummed when it was discontinued and replaced by Surge??!!??  Really it sucked.  And lets face it Vault isn't any better.  they shoulda just made a Mello Yello Ultra or Mello Yello Uber.
Posted by cynicalbuddha at 4:19 PM 2 comments: 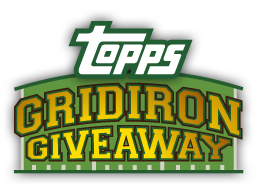 So Topps 2010 Football is here,  yeahhhhhhh.
Glad to see the flagship football set out even if it is a little later than normal.
I have a few complaints but not many.  First is the card design is the same as Topps Baseball.  Again.  I know that they were pressed to get this set up and done in a timely manner from getting the license and what all but there was a time when the Topps Football design looked nothing like Baseball or Hockey or Basketball for that matter.  The inserts are alright but again a few are copies of Baseball inserts.  Legendary Linage and Peak performace.  That being said I do like the landscaped(wideangle) look of the PP cards.
And once again Topps is giving away cards.  So far everytime I've gone to the site to see what's been unlocked it's all junk modern commons.  I'm curious if anyone out there's gotten anything good.  And when is all the auto memerobilia and other goodies going to be let loose?
After opening way too many packs of baseball and entering all my codes.  I came away with a few decent vintage cards and almost a complete set of 1987.  Just kidding but I did unlock a crap ton of junk.  Hindsite being what it is I shoulda just sold all the cards on ebay and made a killing especially after the whole Strassburg ado.
So having busted 2 jumbos now which I'll post the goodies later when I get some time.  I think I'm just going to sell the code cards seeing the last 2 auctions I was watching that had 10 card lots each go for over 20 bucks I think it'll be worth it.  I'm sure I'll buy some rack packs or random packs through out the fall and winter and probably enter a few codes, but lets face it you gotta strike while the iron is hot.
CB out.
Posted by cynicalbuddha at 3:45 PM No comments:

Well I've wanted to try and start an autograph collection for some time.  But with moving and having all my shit spread out all over it's been tough.  Well I was looking for a program to do some customs in and you know what I found Word is alright.  I just upgraded to word 2010 and I'm pretty impressed with what you can do. Pair that with a good printer we got to print wedding announcments and behold.  The first 3 cynicalbuddha customs. 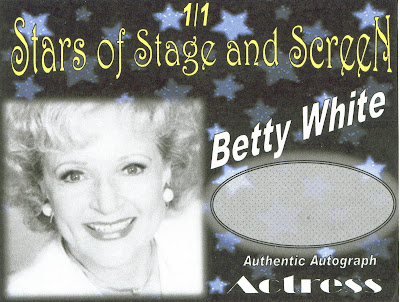 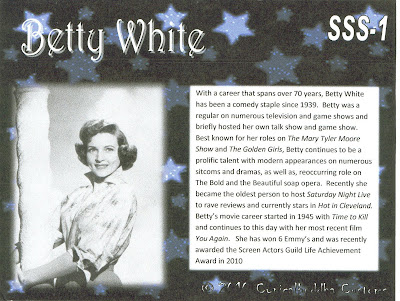 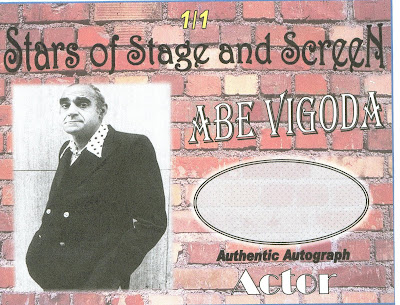 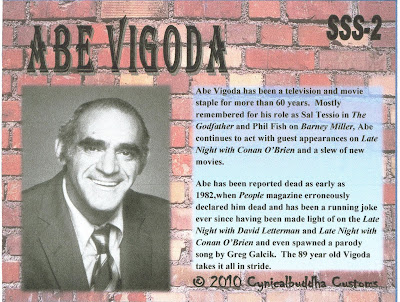 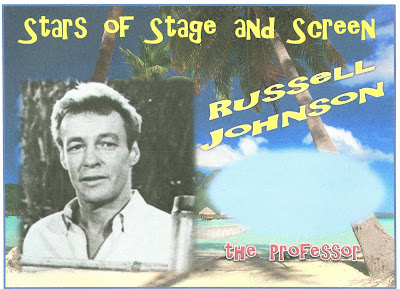 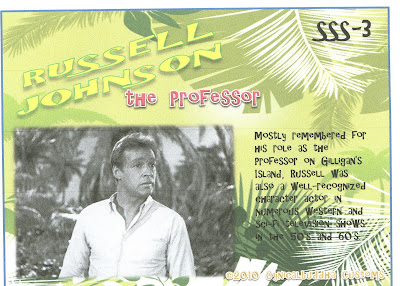 Now your going to say, hey Cynicalbuddha those aren't sports cards!!  Yep they sure aren't.  I decided I'd like to make as professional a custom auto card as I could.  So you'll see a front and back, i'm going to group them in a series based on subjects and professions and I wanted to start with some stars who I know sign from looking at some fan mail sights and who are getting old and might not be around too much longer.  I know kinda morbid but still practical.  I just sent off the Betty White and Abe Vigoda, and just finished this Russull Johnson who was the professor on Gilligan's Island.  I want to get a few sports cards up but I'm having fun with tv and movie stars.  I have a set in mind based on game show hosts and late night talk, authors, and the like not just sports.  I will continue to post as I produce.  Wish me luck.
Posted by cynicalbuddha at 4:19 PM No comments:

Well I was going to post some custom Auto cards I made up and am just about to send out but my girlfriend stole my computer last night and now i'm posting from work. We are in morning up here in Alaska.

Last night we had the funeral for "Uncle" Ted Stevens. For those that don't know Ted was killed in a plane crash last week. He was the longest sitting Republican Senator ever!! And was deposed last election over a trial that was so blatently farcicle that it makes me ashamed. He was convicted of 7 charges, and later exonerated, but pretty much the trial did him in. He still almost won.

I met him once when he came to Haines even shook his head and told him to keep his head up.  I claim no political party and Uncle Ted has had moments that were both good and bad on the Senate floor.
But say what you will that man did a crap load for Alaska and will be missed.
Posted by cynicalbuddha at 8:48 AM No comments:

So I was at Don's Sportcards for his monthly trade night.  Once again no one there had anything I wanted to trade so I waited till he drew for prizes and almost got a box of 2010 Rookies and Stars.  So since I didn't win one I ended up buying a box and here's what I got.
Here is the basic card design. 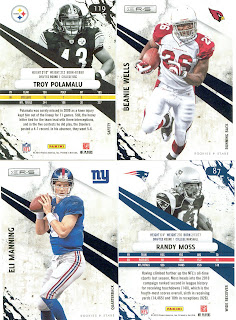 Pretty typical Donruss/Panini nothing special nothing great.
Well in each box you get 24 packs, 8 cards per pack, and 4 hits (Autos, patches, or auto patches)
The great thing is I completed the base veterens set with one box and had 24 doubles.
Here are the hits and inserts. 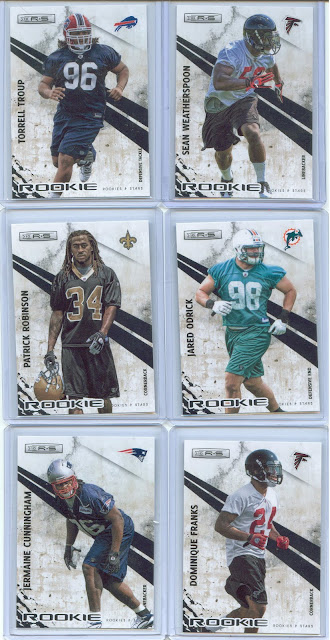 I got 6 rookies here they are. 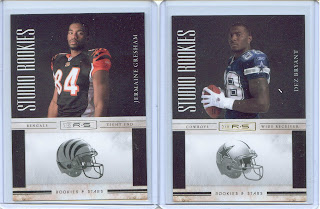 2 Studio Rookies, the Dez Bryant is numbered to 500. 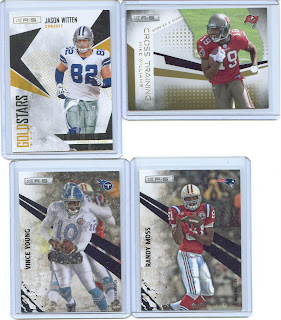 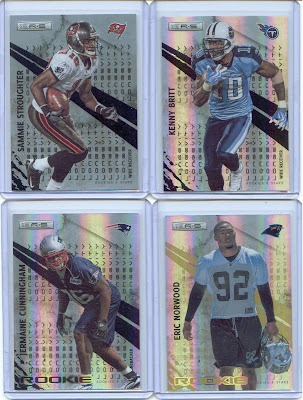 4 Longevity parallels.  Stroughter #to 249, Kenny Britt and Jermaine Cunningham numbered to 99, and one gold Eric Norwood #d to 49!!!
Now for the 4 hits.
First my auto 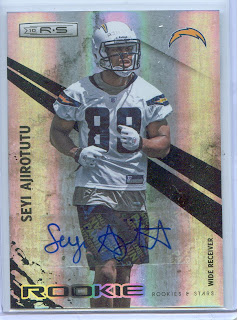 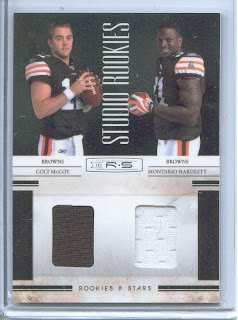 Dual Jersey with Colt McCoy and Montario Hardesty
#d to 299. 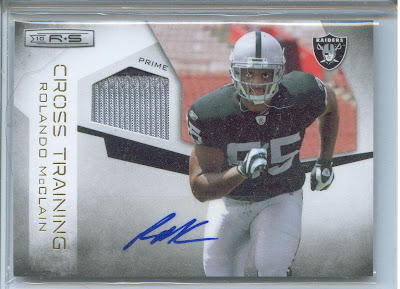 Cross Training Prime Patch of Rolando McClaine Patch Auto #d to 10!!!
BUT!!!
The best for last  I could believe I pulled this. 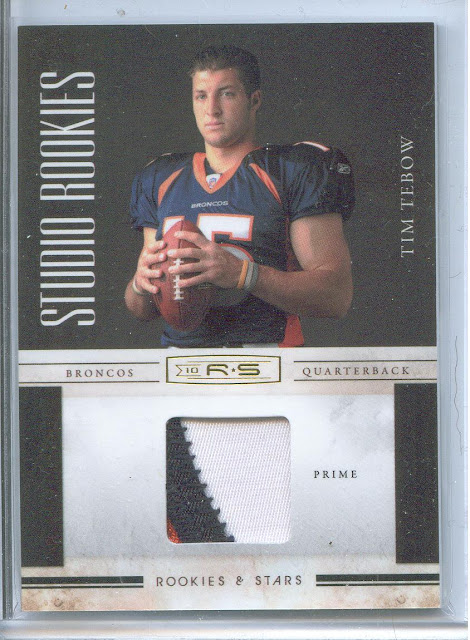 Wow Triple color stitch patch of Tebow #d to 50!! I've seen some others on Ebay but none this nice.
I myself am not on theTebow bandwagon at least not till I get to see him play but damn nice card.  I was almost hoping not to get a full set of base cards which would have made me want to buy another box but come on after this box almost anything else would be a let down.  The only way that card could be nicer if it was an auto card but over all i'm very satified with this box.
Posted by cynicalbuddha at 9:52 PM 1 comment:

I was at my favorite card shop the other day.  Don's is pretty much the only pure card shop in town.  He sells packs, boxes, singles and supplies.  He's got some vintage and some junk.
Anyway, he's hosting a trade night tomorrow.  So i figured I'd come in and grab some packs, maybe a box to get some more tickets for his giveaway drawings.  I was pretty shocked when I walked in.  I'd been up in Fairbanks working for the past 2 weeks so I hadn't been in in a while.  His shelves where bare.  Or I should say sparsely populated.  He had some stuff but nothing awesome.  I don't know what I was looking for but I ended up buying 2 packs Panini Classic football, which in my opinion sucks, and 2 packs of 2009 T206.  I actually was hoping he'd have some cheap Score football but he was sold out of that as well.  I curious has anyone else seen this in there favorite card shop?
Now realize Don doesn't keep alot of stock laying around.  His is a small one man operation.  So with new product coming out slow and from only a couple of sources his choices and mine are limited.   Now move over to Bosco's comics on the other side of town which has a sports card section and honestly it's really nice as well.  They are a bigger operation and keep lots of stock on hand, have tons of old junk wax from the 80's and stuff from previous years.  They also host trade nights.
I have to say I'm bummed about Don's.  And I hope he can survive.  I still buy most of my supplies from him and fair amount of cards.  But like anyone I'm a frugal shopper and will go to the lowest prices.
Comments? Criticism?
Posted by cynicalbuddha at 3:12 PM No comments:

Well news is coming out that Mr. Retirement is coming back once again for another season.  I'm torn.  I mean I should hate him right? being a packer fan, but to be honest I still root for the old guy.  He was my team for a long long long long time and took the team to 2 super bowls.
I wanted him to come back to be honest.  He is 3 shy from 500 career in season TD's.  I mean i remember the race to 420 and how he's almost 100 past that.  If he has anything like the season he had last year he'll end with over 530 TD's.  Could anyone ever top that?  I mean the only active QB that's anywhere close to Favre is Peyton Manning.  And lets face it Peyton is getting old quick too.  One more year for Favre? Two?  Who knows.  After last season I still like having him around and if the Vikings get there 5 minutes in the sun so be it.
I rooted for the old guy in New York and I'll keep on rooting for him in Minnisota.  I won't however root for the team.  Sorry it's in my blood.
Check out my new blog here for rants, oddball stuff and custom card and autograph successes.
Posted by cynicalbuddha at 2:34 PM No comments: