I stopped in at Don's Sportcards here in Anchorage last week.  My wife was picking up my son so I was kid free and decided to just pop in to Don's to see if there was anything interesting and to pick up a couple boxes for a couple sets I was putting together.  Don has a great feature in his shop called the drop board.  It's a huge section of wall with peg board and hooks and he hangs a bunch of cards and packs up.  Each card is listed with a price.  Usually a good 20 to 25% off from the Beckett price and ever week that card doesn't sell it gets marked down a little till it reaches a dollar and that's the lowest it'll go.  But I've picked all sorts of good relics, autographs, and vintage from that drop board for crazy low prices, a lot of them for the bottom dollar price.  Well to my surprise Don had a ton of this year's Panini Cooperstown hanging on the wall.  All sorts of inserts and autographs from the set.  And then I saw the Ignitor just sitting there marked down to I think it was six whole dollars.  I couldn't pass it up.  I'm not a huge collector of Paul Molitor, but he was a Brewers for most of his career, is still beloved in Milwaukee, and I do have a nice stack of his cards in my collection, but I didn't have an autographed card till now.  I have a sweet relic I picked up years ago, rookie cards and everything in between, and now I have my first, but hopefully not last auto of the #2 all time top Brewer.  On top of that I haven't added a card to my Top 100 in while.  I had to look and see what number I stopped on.  So this is card #72 in my Top 100 cards in my collection (the number is not the card's rank in the Top 100, the Top 100 has no rankings).

Welcome to the collection. 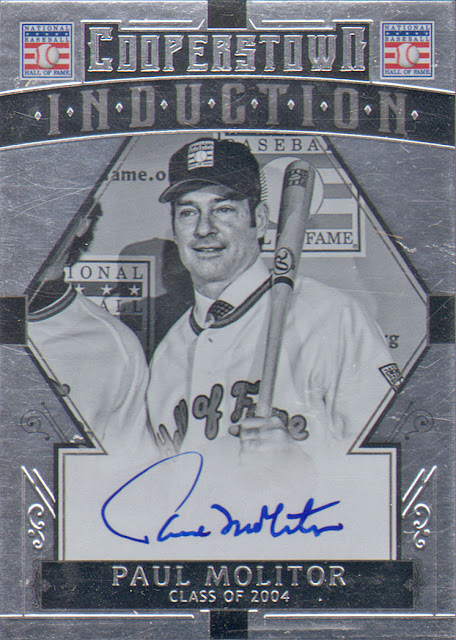 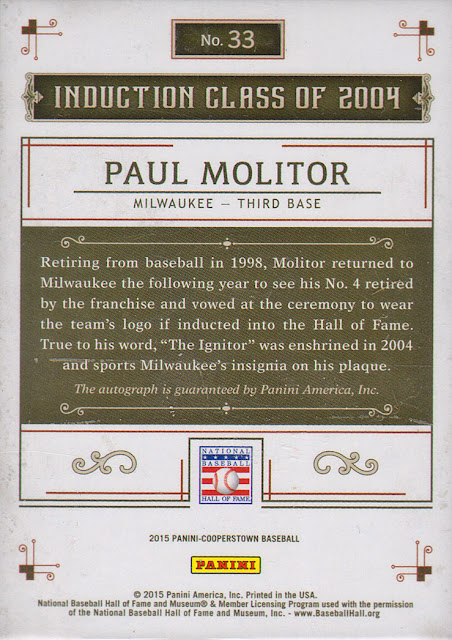 Don't make him angry....you wouldn't like him when he's angry

Love him or hate him Ryan Braun is the face of the Brewers. As a Brewers fan that fact disturbs me a little.  Mainly because we have and have had other players that could easily have replaced him.  I have forgiven him for his steroid use and the whole circus that followed. Well forgiven him to a degree, he did get a man fired for doing his job just to save his ass for a year.  But that's a whole other story.

Regardless of Ryan's past transgressions I've wanted to add his autograph to my collection for a long time.  And up to a few years ago that would have cost me big bucks.  Oh what a few years and a steroid scandal can do.  After selling a few things on ebay I had a little money to play with and decided to see I could find.  I wasn't sure which way I wanted to go, just an auto, a relic auto, dual auto.   After looking for a few weeks I found this beautiful 2015 Topps Five Star on card auto.  Overall I really like the look of the card.  I had thought about trying to track down one of those great looking black cards with silver signature, but this card fell into my lap and I ended up picking it up for less than $10 delivered. 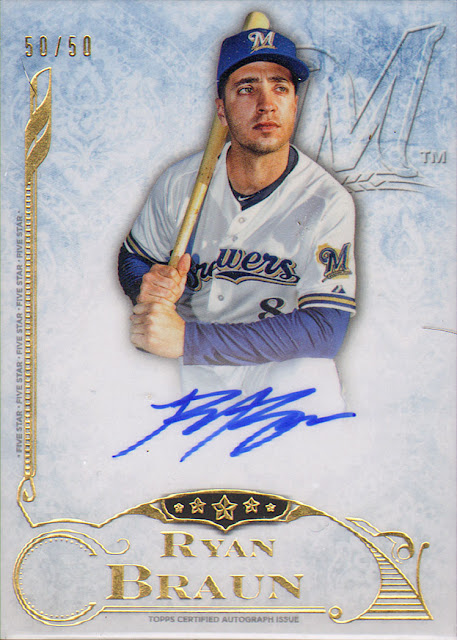 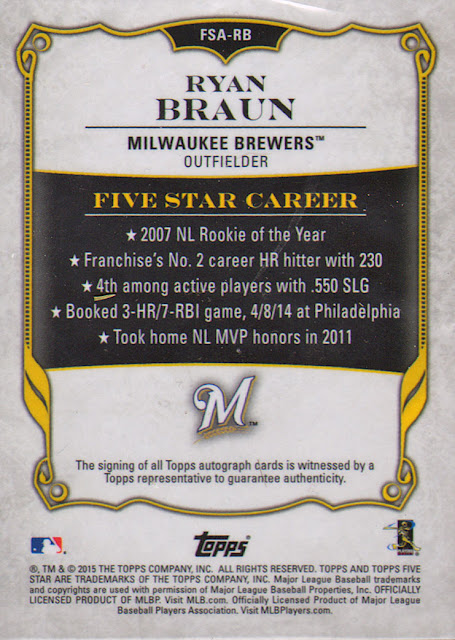 Posted by cynicalbuddha at 8:17 AM 3 comments:

I apologize for not posting more during the playoffs. It was a culmination of a lot of different things, but it all boils down to life.  But that being said it was interesting the way things played out.  I'm still not sure what the grand prize will be.  But there is a card show here in town, the first one in a couple years and it's at the museum tied into an exihibit on baseball in Alaska.  So it should be a big fun show and I'm hoping I can find something to give away.  If not I'll find something don't you worry.

So lets recap and see who made the cut.

Richard Nebe Jr. - Dodgers over the Blue Jays in 7 with 7 homers

There were quite a few of you that picked the Royals to win it all, but none of you picked them to beat the Mets.   Only one picked the Mets to beat the Royals.  So if that's the way it plays out John Hazen will take it all with an impressive prediction.

Here are the final 9.

It's go time people. Below are the official entries.  If my math is right we had 31 people enter.  Not too shabby.  I'll be posting an update after the divisional series are over and I'll announce the prizes then.  If you see an error let me know.  Good luck.

Richard Nebe Jr. - Dodgers over the Blue Jays in 7 with 7 homers

You've got just under 5 hours as I write this if you still want to get in on the contest.

Go HERE to ENTER
Posted by cynicalbuddha at 3:04 PM No comments:

Also I just did a quick look at the entries so far and we had two brave souls that picked wild card playoff teams before the games and those teams lost.  So because I love moxy and you could have waited till last night or today to make a pick after the games were finished, if you picked one of the Wildcard losing teams I'll allow you to try again.  Just reply to your previous pick and amend it.

You have until 8pm Alaska time, that's midnight on the East Coast, to enter.  It's looking like were going to have a good turn out and I'm planning on digging out prizes this weekend.
Posted by cynicalbuddha at 8:00 AM No comments:

Just another reminder to take a few minutes and enter my 5th Annual World Series contest. You have until 8pm AKST/ Midnight EST.GO HERE TO ENTER
Posted by cynicalbuddha at 8:00 AM No comments:

Just a reminder to take 5 minutes and enter my 5th Annual World Series contest. You have until 8pm AKST/ Midnight EST.

GO HERE TO ENTER
Posted by cynicalbuddha at 8:30 AM No comments: 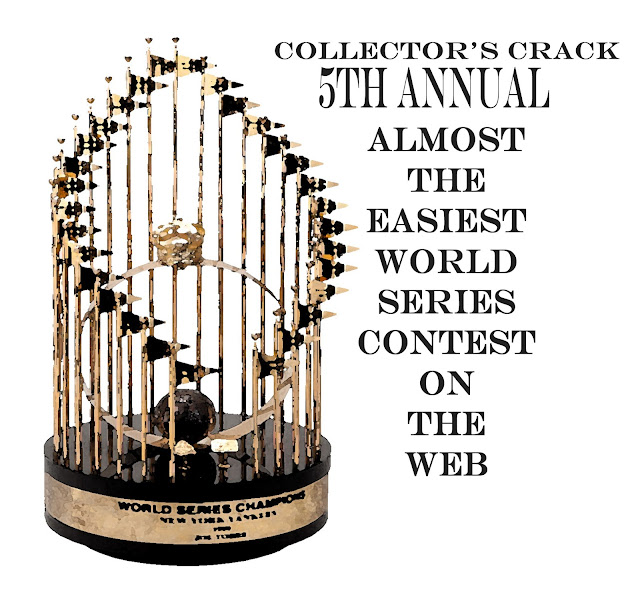 Well it took till the last game of the season to have all the pieces in place.  With wildcard games starting Tuesday that doesn't leave too much time to do a sign up, but I'm going to leave the sign up open till Friday night, lets say 8pm Alaska time.  That'll be midnight on the East Coast.

So are we going to mix the contest up for the 5th Annual offering?  Nope.  This is and always will be almost the easiest contest on the web and all I want you to tell me is who's going to win?

Of course some of you might pick the same team so we need a few tie breakers.  So I also want you to tell me who the opponent will be, how many games in the series, and how many total home runs will be scored, both teams.

The tie breakers are ranked in that order, opponent, games, HRs.

So what are you playing for?  Well I'm still trying to figure that out and pull stuff out.  To make matters worse the next two weeks are going to be very busy for me.  So trust me that I'll put together a nice prize package and the winner will also get some cards of their favorite team and/or players.

Let's not forget, there will also be a door prize just for signing up.  I'll enter all the entries into Random.org and randomize the list 3 times.  Person at the top gets the prize.  Plus like always if you promote this contest on your blog or other social media you'll get an extra entry into the door prize drawing.  Just leave a link to the pimp so I know you did it.

I would also like to ask if you sign up for the contest you have some way of me getting in contact with you. ie an email attached to you profile.  Believe it or not I've had prizes go unclaimed before.

Alright here are you choices.


I'll be posting reminders all week.  Alright good luck and thanks for playing.

Posted by cynicalbuddha at 9:28 PM 38 comments: