Well to be honest this wasn't a trade. Or was it?  Who can keep track of these things.  Regardless no good deed will go unpunished.  Ahem. I'm rambling, and not very coherently either.  Troubling.  So I've been fairly absent on the blogging scene.  I know it.  But there is a man who still manages to put out pretty top notch content on almost a daily basis. Of course I'm talking about Fuji over at the Chronicles of Fuji.  His flea market finds are still my favorite.  It reminds me of my youth when my father was stationed at Ft. Bliss in El Paso, Texas and I use to go to the different flea markets around town.  Sadly there are no flea markets up here in Alaska.

So while I have been absent, save for my contests and the rare post about trades, Fuji has been hard at work shaping young minds and finding cool stuff and blogging about it.  Rewind to a couple weeks ago and Fuji contact me for my new address.  And last week I was rewarded with a nice pair of Brewers autographs. 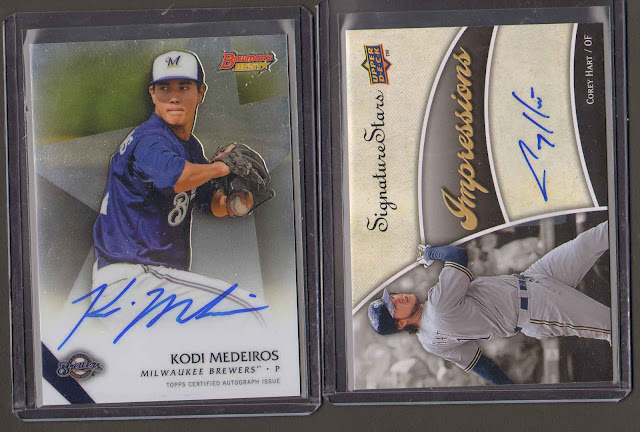 Kodi is still bouncing around the Brewers farm system.  Will he come up?  Will he be traded? I guess time will tell.  The other auto was of the former and now retired Brewer Corey Hart.  Corey was one of the semi-stars on the team eclipsed by  Ryan Braun and Prince Fielder unfortunately, and of course injury.  When Corey was healthy he was a force to be reckoned with.  Plus he's freaking tall.  Sadly Corey was injured  a lot, or at least that's how I remember it.  I was kind of bummed I didn't at least get to see him at the 2012 Spring Training games I got to go to on my honeymoon.  He ended up having to have surgery and missed the whole 2013 season.  After that he spent a year in Seattle and then a year in Pittsburgh and I don't feel too bad, he made some good money those two years.  He retired after the 2015 season, but officially retired this year as a Brewer.

Two very nice autographs to add to my Brewers Collection.  Thanks Fuji!!
Posted by cynicalbuddha at 7:50 PM 2 comments:

Have you ever started something only to kind of regret it later?

This last weekend we got our first big snow fall.  I think overall it was lucky it happened during the weekend, but I hate going out onto the roads when the first significant winter event happens.  You would think that living in Alaska most of use would be good at driving in the snow, but alas that is not really the case, at least at the start of winter.  I consider myself a very good winter driver, but I'm not worried about me.  Anyway, so with a little over 3 inches falling Friday night into Saturday afternoon I decided to hunker down with the family and enjoy the snow in the back yard and not on the roads.  It also meant I got a good amount of time to cause trouble in my Sanctum Sanctorum.  More importantly organizing a collection that has been mothballed for the better part of 3 years.

Last June the family and I upgraded to a much bigger house, over twice the size of our previous home.  Having that much space is awesome.  What is even more awesome is my wife gave me one of the spare bedrooms as my "office"/studio/man-cave.  I've posted about some of my efforts in the past.

When my in-laws were up here this summer my father-in-law helped me start another built-in bookcase for the man cave.  I'm huge on storage and I weighed the options on buying prefab bookcases verses building my own and in the end I opted to try and build my own custom shelves. 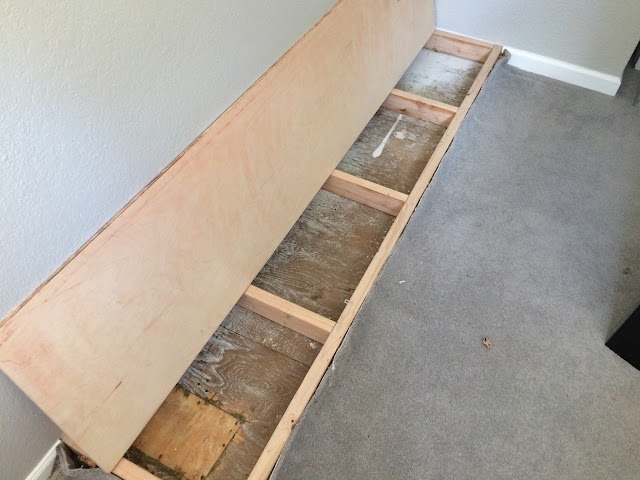 I consider myself pretty handy and with Youtube and all the home improvement shows I've watched and all the handyman websites out there I put together a pretty well thought out design.  I couldn't find the plans I had drawn up to post here, but they were pretty detailed.  I did manage to snap a few photos as I went along.  Here is the base of the bookcase.  It's 8 feetish long. 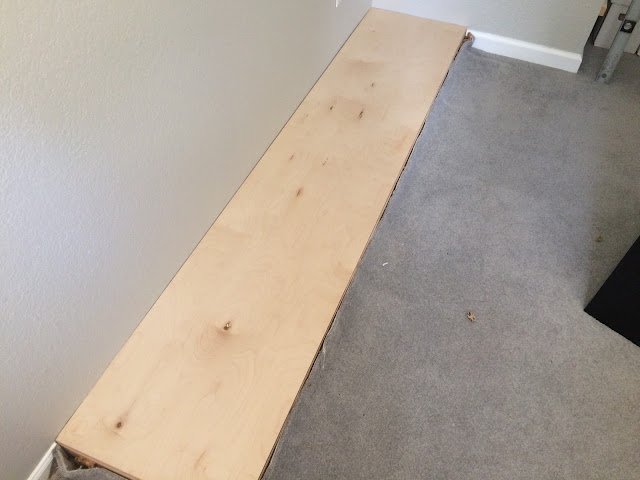 While my father-in-law was here I managed to stain and polyurethane the frame. 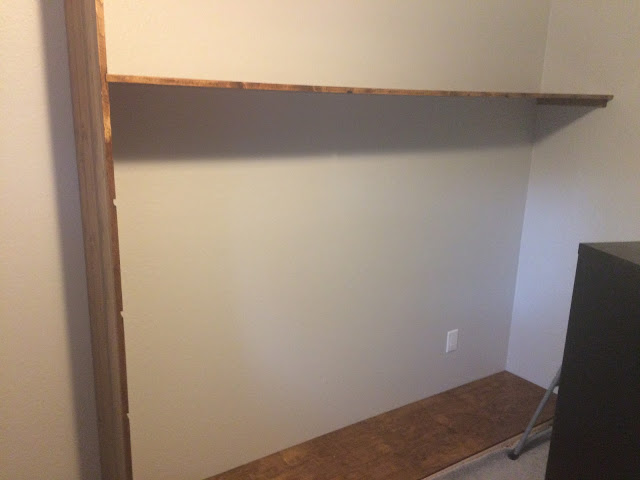 I picked up a router from a garage sale a few year back and I love any reason to bring it out. 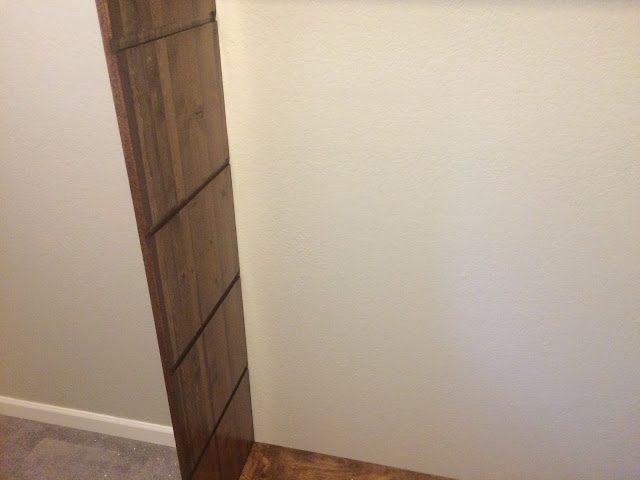 So the project stalled for about 2 1/2 months with work taking me all over the state, but this fall I managed to get the rest of the pieces cut and put in place.  My plan now is to disassemble the unit this spring and stain and polyurethane the rest of it. 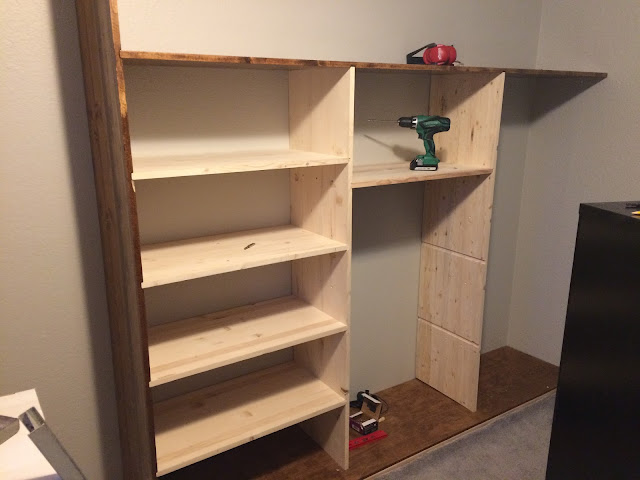 So fast forward to this weekend and I'm waist deep in organizing my comic collection.  My wife is very tolerant.  But even she has her limits and one of the rules she laid down was the craziness had to be contained in this room.  And I'm trying.  Sad, or maybe not so sad, that this in only about half my collection. I still have a ton of stuff sitting in my parents basement in Wisconsin.  So this weekend I buckled down, put on my best superhero pajamas and got to work.  I've been making make-shift dividers out of manila file folders, you can read my tutorial on that at my comic blog here, to try and get all the series together, then hopefully I'll be able to put those in some sort of order. 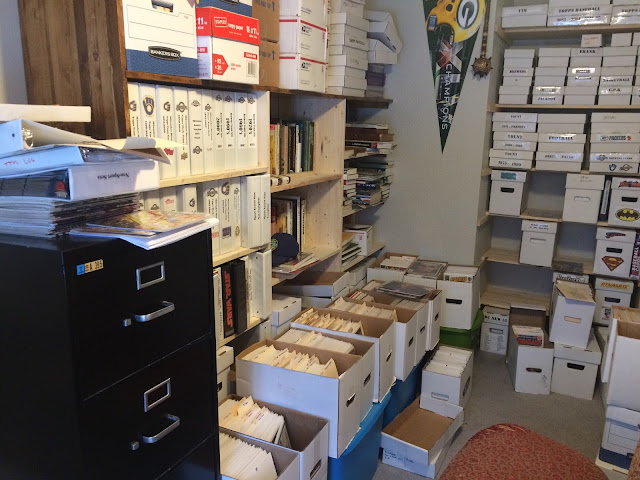 I've literally spread out over the entire room, but kept it mostly contained. 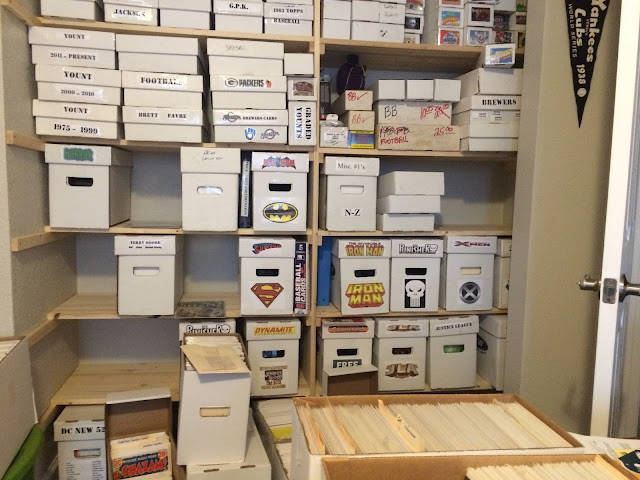 Some of my bigger runs like the Punisher, Iron Man, JLA, and X-men all get their own dedicated boxes. I think I'm only about halfway done, maybe.  I'll do a better post later of the room once I get it better organize a little more presentable.  I also have a major card organization to work on.  That includes my Brewer's team collection and just set's in general. 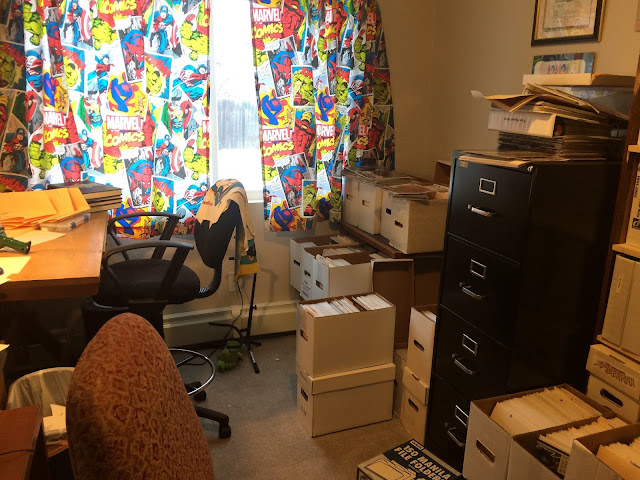 Posted by cynicalbuddha at 9:19 AM 6 comments:

Winner Winner Chicken Dinner - The 7th Annual Almost the Easiest World Series Contest on the Web has a Winner! 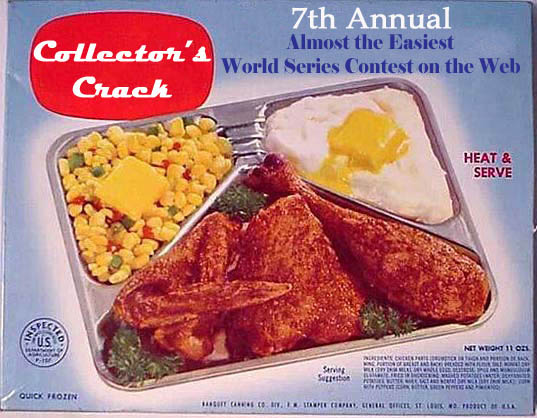 Wow what a great series.  As someone who had no horse in the race it was fun to kick back and watch the show.  I really didn't care who won, I was pulling for the Astros a little simply because this would be there first World Series win in franchise history, but honestly the two best teams in baseball duking it out what could be better?.  And that game 5!

In the end we had six participants correctly guess that the Astros would win it all.  Out of those six we had 3 that correctly guessed the match up, but only one who guessed it would go 7 games.  No one came close to guessing what a slug fest this would be, but in the end the Sportzcommish came out on top!!

The correct guess plus tie breakers would have been

The tie breakers run one into another so we had to go to total games to find the winner.

Now for the door prize winner.  I entered all the entries into a list randomizer over at random.org and randomize the list 3 times.  Those that promoted the contest on their blog or other form of social media got an extra entry. 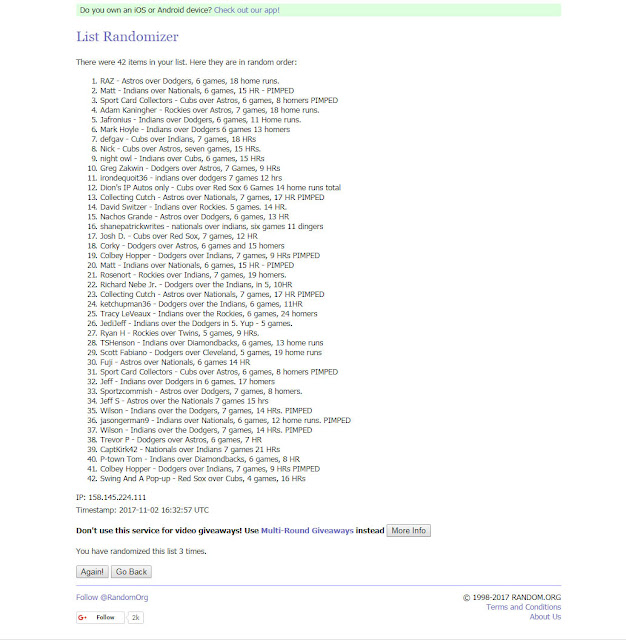 In an odd twist of fate our second place finisher RAZ is our door prize winner!!!!

Sportzcommish and RAZ I will be trying to contact you shortly unless you get a hold of me with your current mailing addresses.

I want to thank everyone who entered this year.  I've been pretty bad about finding time and stuff to blog about, but it's still nice to have a big turnout for the contest.  And since we are already halfway through the NFL season, man it's flying by, I'll be holding my 8th Annual Super Bowl contest in the near future.

Thanks again everyone.
Posted by cynicalbuddha at 8:46 AM 6 comments: