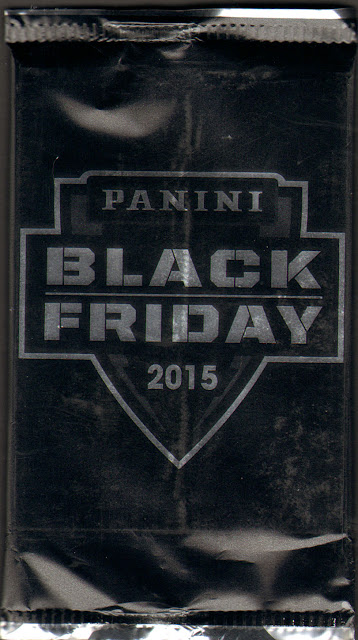 I had to take my son to the doctor on Friday.  It wasn't anything serious, but after we got out I decided to head on down to Don's Sportcards and say hi since I haven't been in a while and I wanted to see if there was anything good on the drop board.  I ended up splurging on a box of Prestige Football since it was a good deal and I got 4 packs of Panini's Black Friday.  I won't do a pack by pack just the base cards and the hits.

Each pack came with an advertisement for Panini's new digital football card app.  If it's anything like their basketball app I'll pass.  You also get one "base" card and one other card.  At least that's how my 4 packs worked out.  Let's take a look
First up Pujols and Trout. 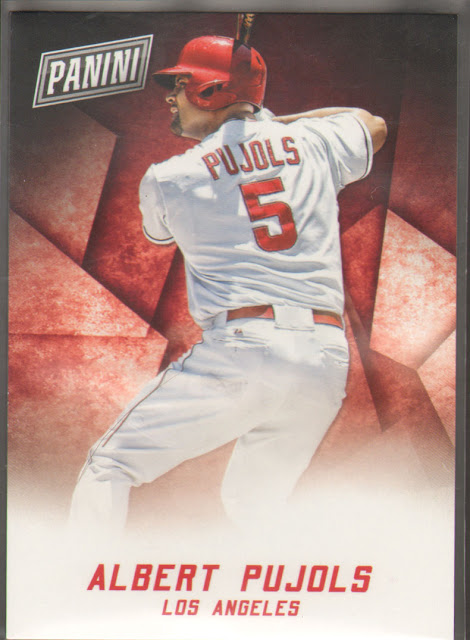 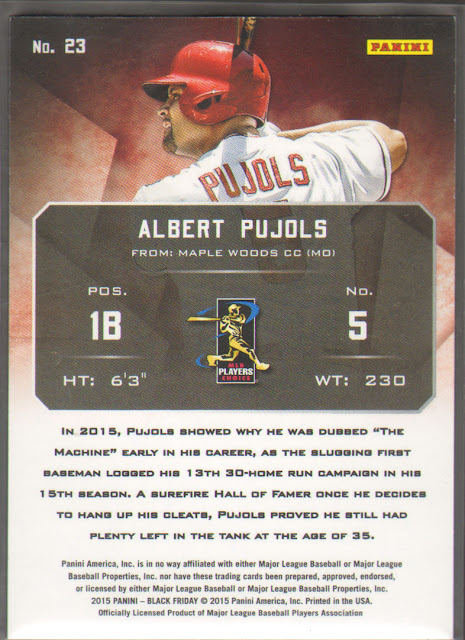 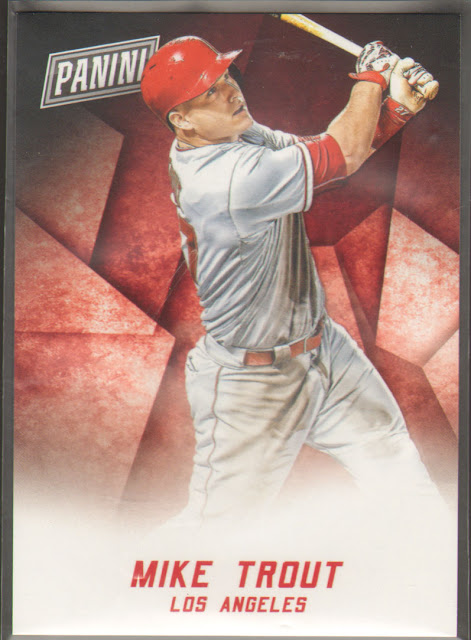 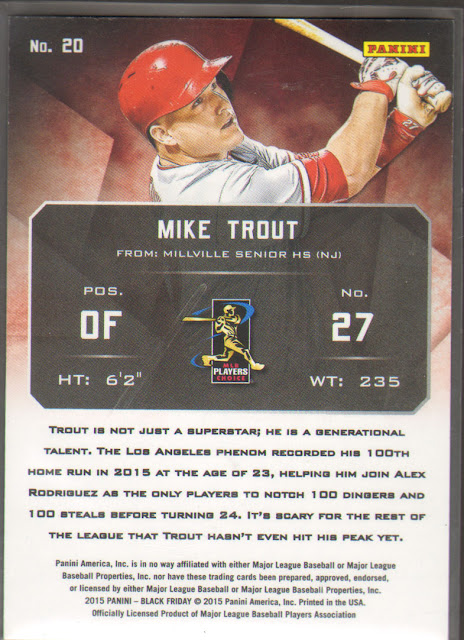 My other two base cards are part of the Panini Collection set, according to Cardboard Connection.
I really like the look of these cards. 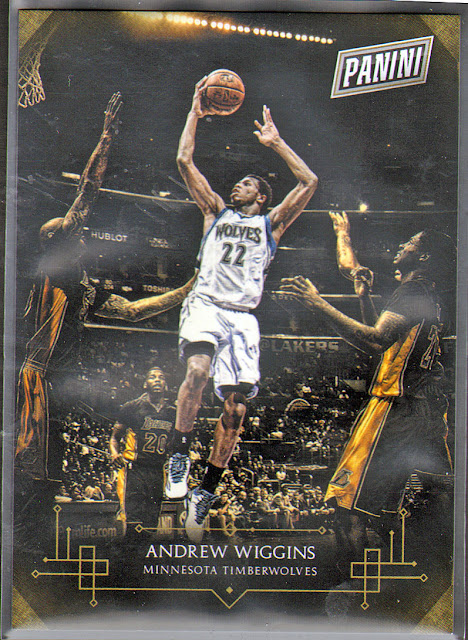 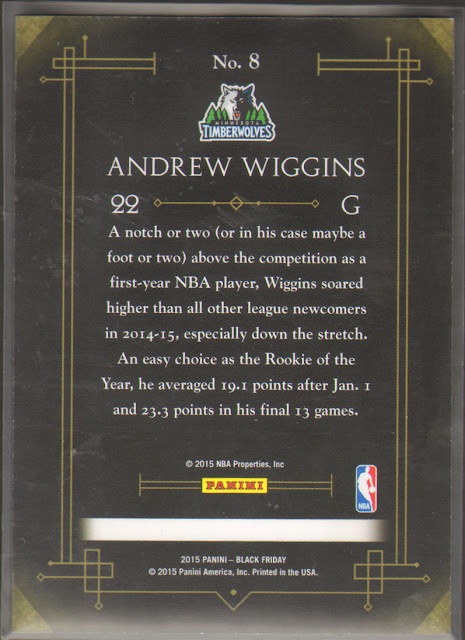 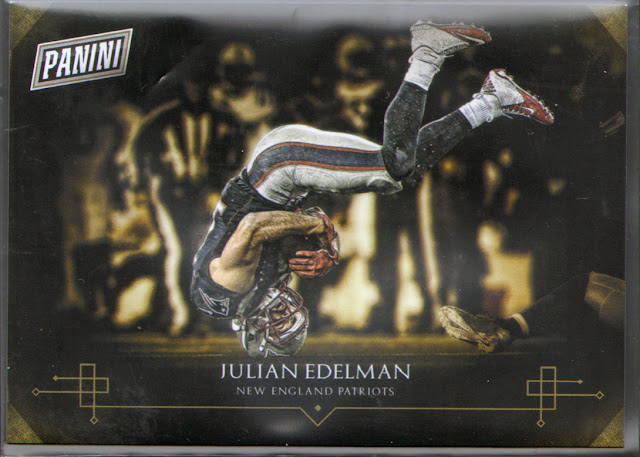 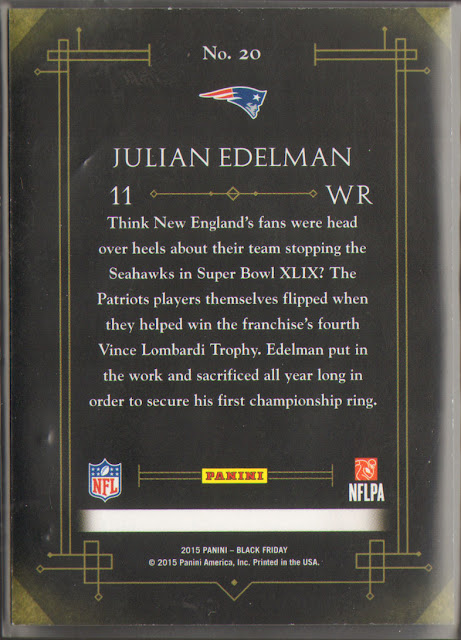 Alright lets get to the meat!
This Kevin White and the Joc Pederson are what's called Thick Stock parallels and are numbered to 50. And they are very thick 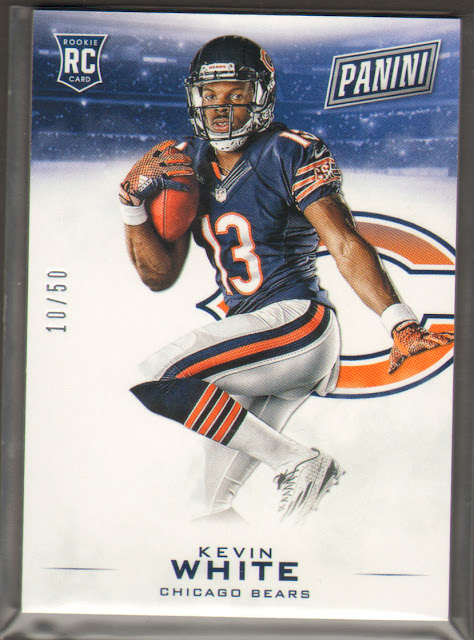 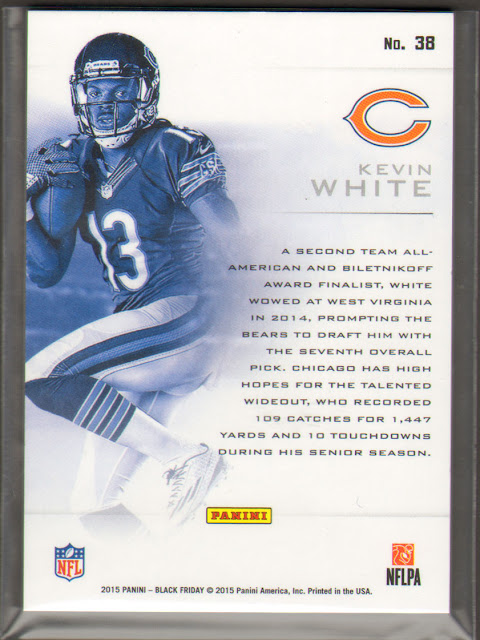 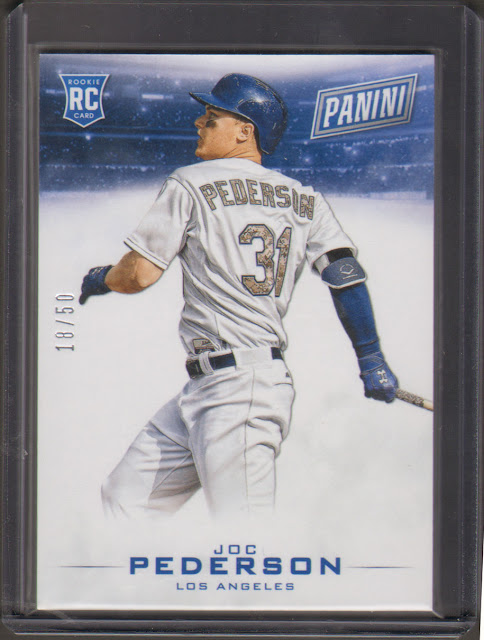 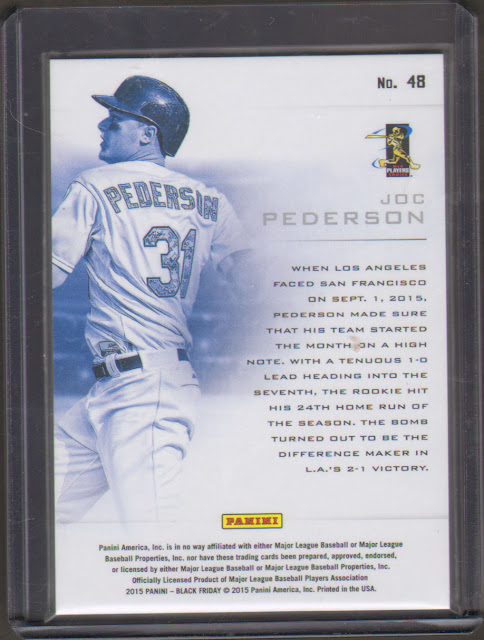 I didn't get any autos, but did manage a few relics.  This one of Jahlil is from the Happy Holidays set. 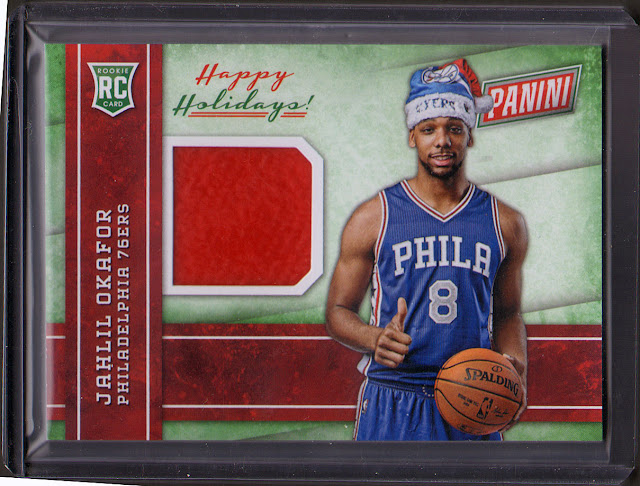 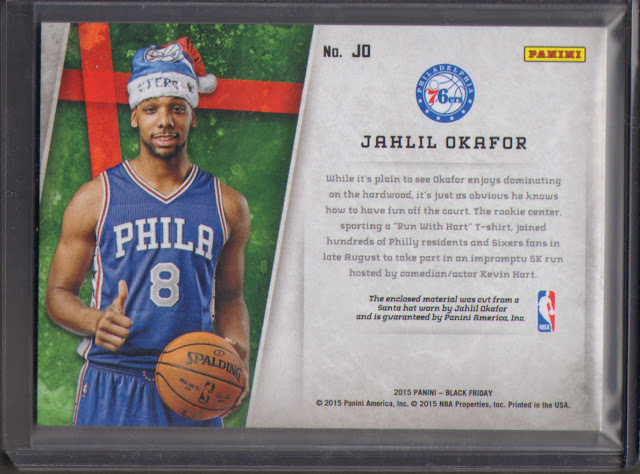 Cha-ching a keeper!!  Everything else is already up on Ebay.  Anyone get anything cool? 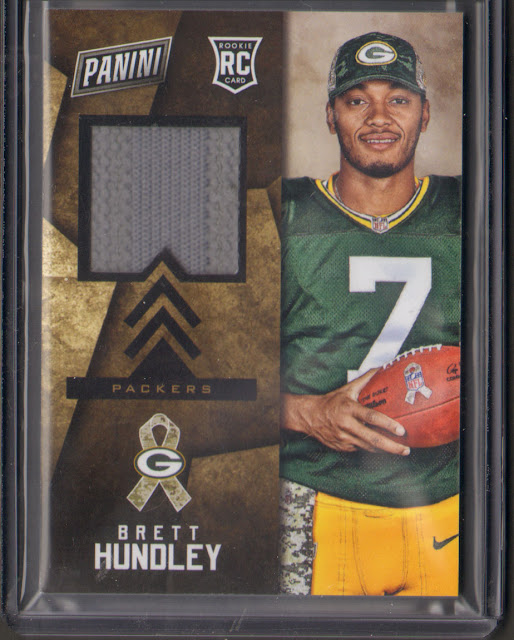 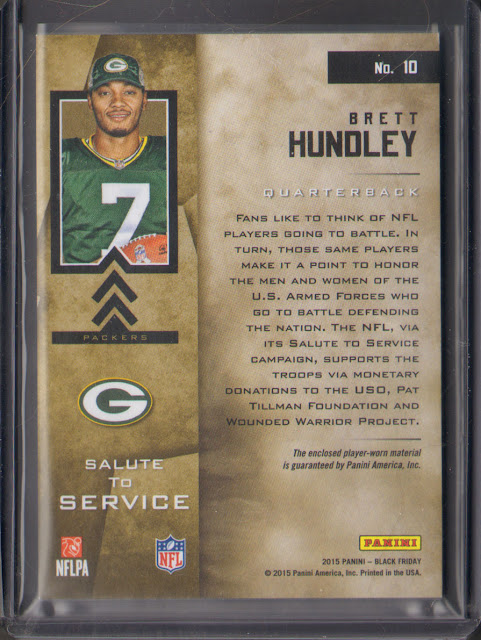 As a collector I have rules, general rules, but rules none the less, that govern my collection and collecting habits. But every so often a card or other collectible falls into my hands that doesn't really fit into my collection, but I keep it for various reasons.  This is one of those cards.......

I pulled this beautiful card out of pack way back in 2005.  I know I did because while I like Andre Dawson I don't collect Andre Dawson and I wouldn't have gone after this card.  That being said a lot of the cards in my Keeper collection come from 2005.  A time where I had a lot of disposable income and card companies were putting out great products like this.  Sorry for the blurry scan Mr.  Dawson is well encased in a screwdown holder. 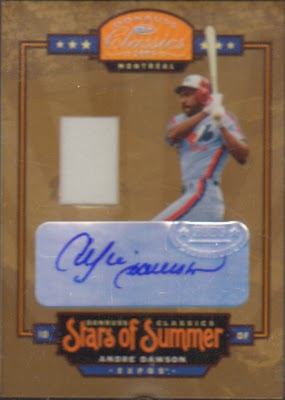 I usually think of Andre as a Cub. Mainly because when I started caring about baseball and baseball card that's who he played for.  But even if he's featured with his original team this is still a pretty kick ass card.  Sure it's a sticker auto and the relic is a plain white swatch, but I'm sure I squealed a little bit when I pulled this out of the pack. 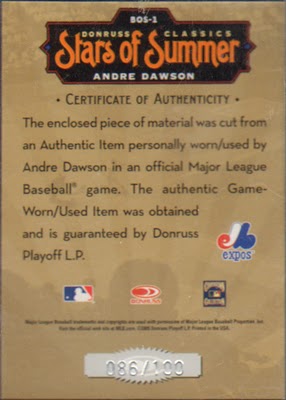 Why I keep it.  Well I do like Andre Dawson and it's hard to let go of personally pulled autograph and relic of a great HOFer.  Plus Andre has a great signature and I think everyone should have an auto of the Hawk in their collection and it's also why he's on my Top 100 cards.

Winner Winner Chicken Dinner. The 5th Annual Almost the Easiest World Series Contest on the Web comes to a close

Well that seemed quick.  I was kind of hoping the Series might go 6 or 7 and KC could win it at home.  I didn't get to watch too much of the game as the Packers were playing in Sunday Night Football, but once it was pretty clear that they would not be winning I switched over to watch the end of game 5 and I picked the perfect time right before KC tied the game in the 9th.  Anyhoo

So in the end we had 6 people correctly guess who would win the World Series.  So we go to the tie breakers.

If anyone had guessed everything correctly the pick would have been

Out of the 6 contestants the picked the Royals no one picked their opponent to be the Mets so we move on to games in the series and arpsmith correctly predicted the series to last 5 games.  Congrats Adam.  And an honorable mention to John Hazen for correctly guessing the right two teams. If the Mets had won the contest would have been his.

Here are the final 9 entries:

Adam came pretty close to predicting total home runs too.  So what does Adam win??!!??  Well I was terrible this contest, in that I didn't have a prize already picked out. I was hoping to be able to snag something cool at the last card show I went to last week, but while the show featured some really cool stuff, cool = expensive, I didn't find anything really unique, but I'll probably write a post up about that experience later.  So I decided I'd wait and try and tailor the grand prize to the winner.  Adam who has his own blog ARPSmith's Sportcard Obsession  is a huge Giants fan and he collects a couple other players.  So digging through my eTopps collection I came out with a couple cards to add to his collection.  First up is a 2011 Topps 206 Rickey Henderson card and I also found one lone Giants card in my collection a 2007 Fred Lewis rookie card.  Both cards are numbered to just 749 copies.  I'll also be sending Adam a nice stack of cards from his team and if I can find anything from his needs lists. 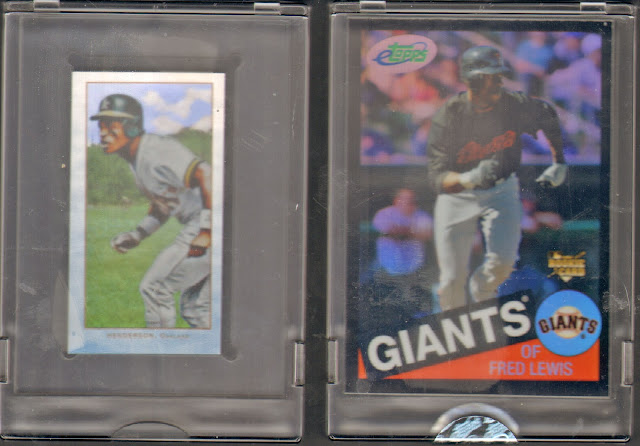 But wait there's still more.  We have to pick our door prize winner.  I entered everyone's name into a list randomizer over at Random.org, those that pimped the contest got two entries.  I randomized the list 3 times and...... 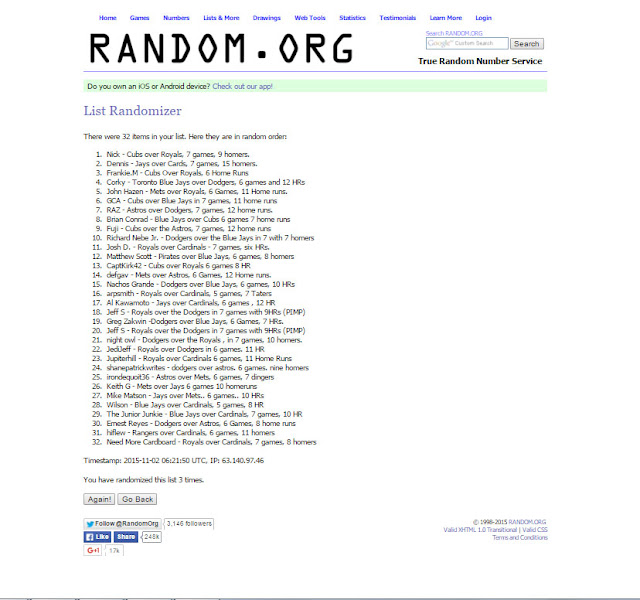 Nick from Dime Boxes - The Low End Collector's Journey wins it.  And what did Nick win, well this should be right up his Dime Box alley.  4 unopened packs from the height of the Junk Wax era.  Plus there's a piece of 26 year old gum, a Stan Musial puzzle piece, lenticular trivia card, and team sticker to be had. Plus there might be one of those cool Pro-Visions cards in the Fleer pack.  I'll also be sending Nick a stack of cards  from his needs and wants lists. 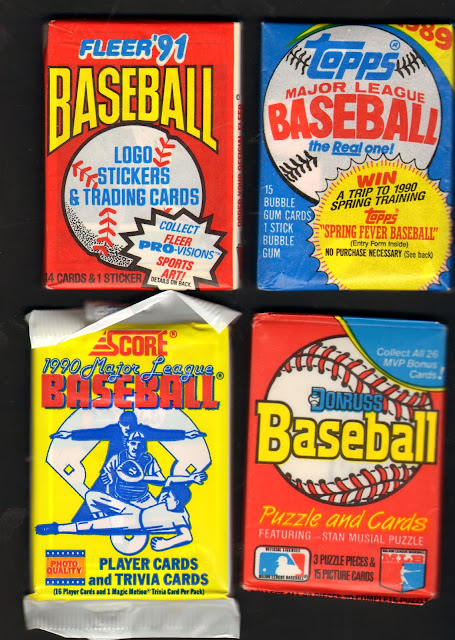 Thanks to everyone who entered. Thanks to you guys who still read the blog even though I don't post as regularly as I use too.  That being said we are only about 2 months away from my 6th, yes 6th Annual Super Bowl contest.  Hopefully I'll have a few posts between then and now.


Posted by cynicalbuddha at 8:37 AM 2 comments: