I'm back. At least for a while.  So the first thing I did when I got back to town was head on over to Bosco's and picked up a jumbo box of 2012 Topps Football.  I needed some trade night tickets for this coming trade night.  No ones won the past 3 or 4 months so there is almost 800 dollars worth of packs up for grabs.

So lets take a look at the set and what I got. 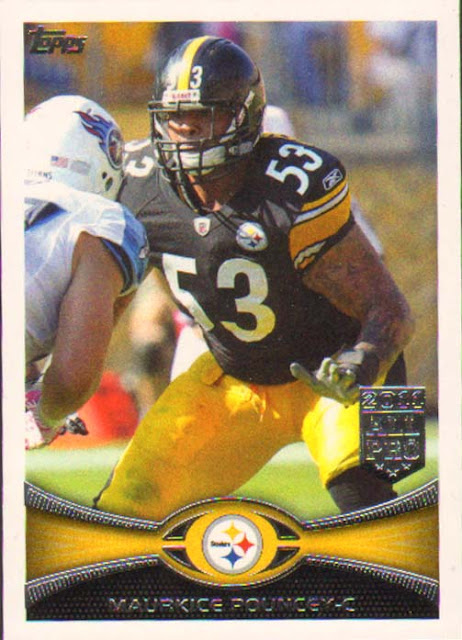 First I just want to say how happy I am Topps has decided to go back to unique designs for it's football product instead of just using the baseball template.  And I like this years design.  I choose to feature Pouncey here because he was my only double out of the whole box!  That's pretty damn good collation.  As a matter of fact I'm only short about 21 cards for my set, so one jumbo box got me 95 percent of the set.  Not too shabby.

Let's take a look at the inserts.  A few I really like and a few I could have done without. First the bad. 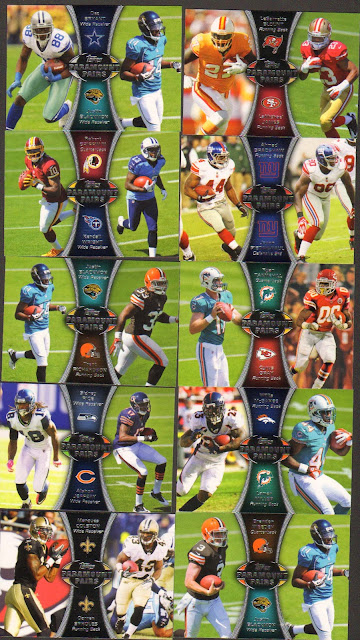 First up we have the Paramount Pairs.  I really don't know what Topps fascination with having these duo cards is.  For the last 4 or 5 years Topps has included some kind of match up in it's baseball and football sets.  A lot of times the connections and pairings are pretty suspect.  I get the guys on the same team, but most of the cards take these player back to college when they were on the same college team. meh.  I don't think it's a bad looking card and the relic and auto versions aren't terrible either, but it's just not a set for me. 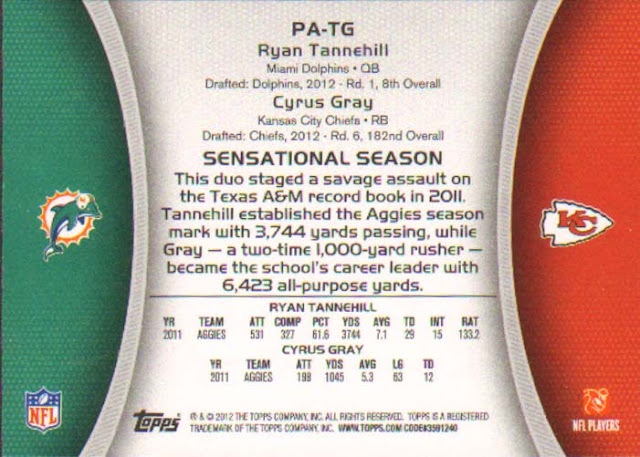 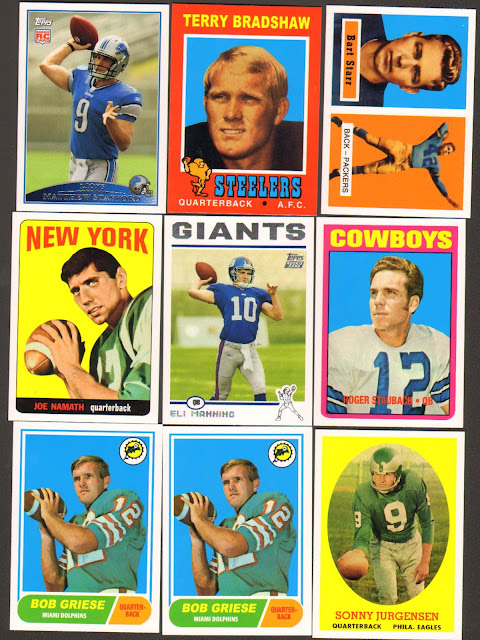 Next we have these Rookie Reprint cards.  I pulled 9 out of the box, 2 Griese's.  Another trend Topps doesn't seem to be able to get away from.  Hey Topps I'm tired of stupid reprint cards! Tell the designers to put the bong down and come up with an all new original inserts for the next set! I also love that the Joe Namath card is regular size not Tall Boy, yet there is a Tall Boy insert this year. 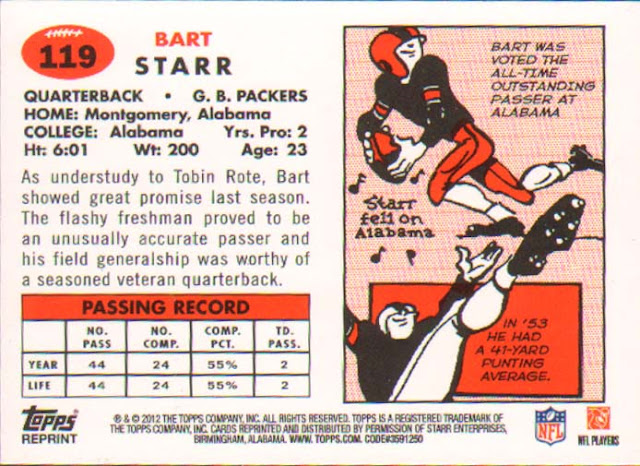 The backs are replica as well and Topps makes sure you know it's a reprint.

Now on to the stuff I like.
There are quite a few parallels to the base cards this season. Camo, Pink, Black, Gold and 1/1 Platinum.  The odds of the Camo and Pink are about 1:11, so you're not guaranteed any in a Jumbo.  I didn't snag any of those, but I did come away with 5 golds.

The best of the pack is the MJD one there. Now if he would just sign a contract. 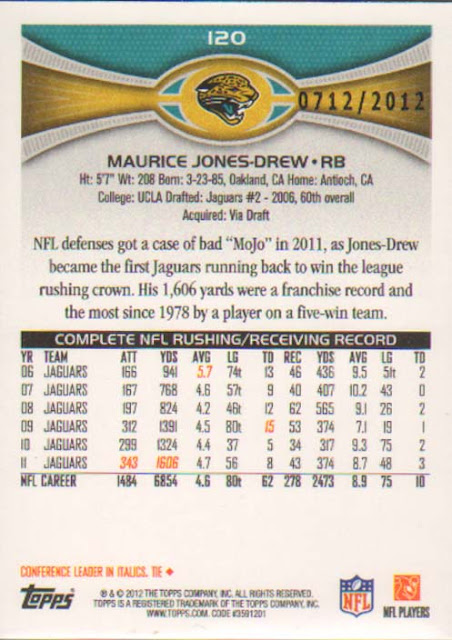 I also like the new numbering on the backs of the parallels this year.  Oh and here's what a base back looks like. Sorry forgot to scan one of Pouncey. Just imagine there is no serial number there.  The past few years Topps stopped doing is foil stamp numbering and started using a terrible looking printed serial number that was obviously put on at very high speed.  Here while the number is still in black. It's solid, not smudge and very legible.  +1 Topps! 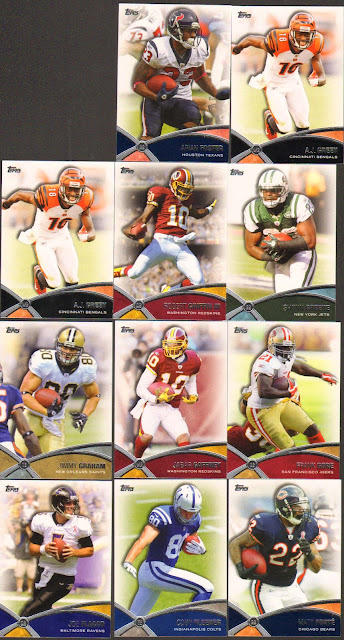 Next insert I like is the Prolific Playmakers.  I love the design and when I first saw this I thought to myself, damn this would have made a nice base design. I ended up pulling a bonus one of these coming out of the break with 11 and two AJ Green's. 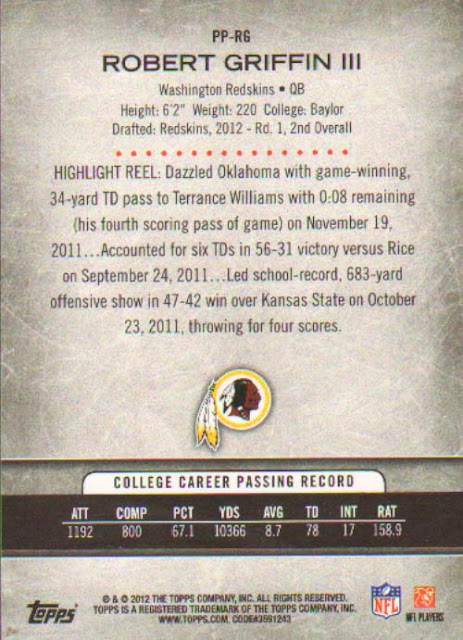 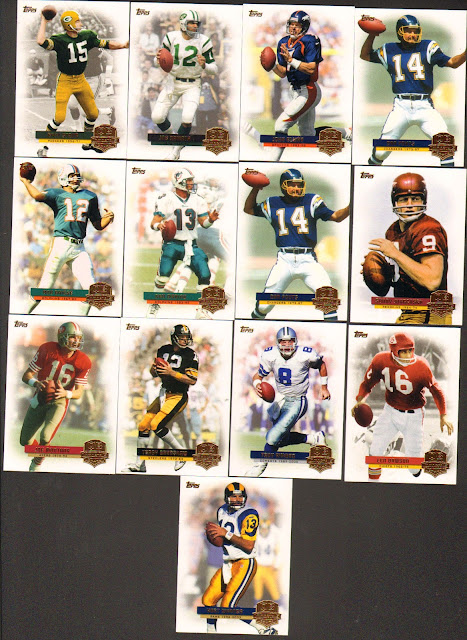 Next up we have QB Immortals. Another great looking design and another insert that I thought would have made a good base design.  I wasn't really paying attention to how these were coming out of the packs but in a 10 pack box where usually you get one of each insert in a jumbo pack I walked away with 13 of these and oddly enough no doubles.  Nice. 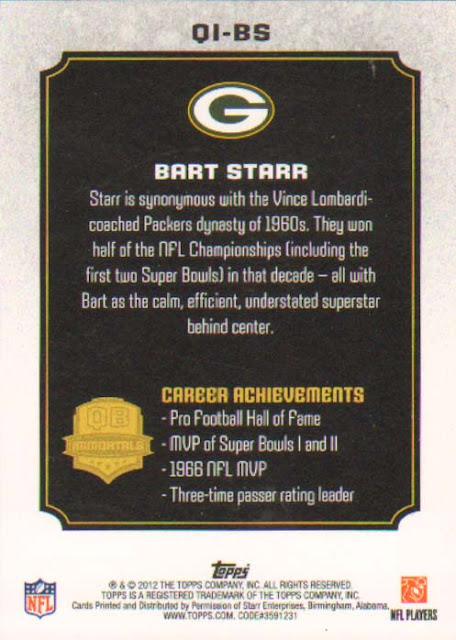 My favorite insert of the set is of course the Tall Boy Mini's.
If you read my blog regularly you know I love mini's and oddballs, so of course this insert set is right up my alley and of course I'll be going after it. All 141 of them.  10 down 131 more to go. 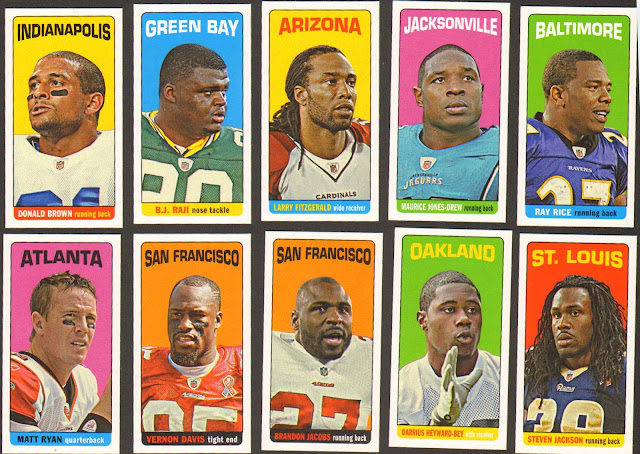 I have no idea how I'm going to store or display these. They're bigger than the tobacco size mini's and smaller than the original Tall Boy's.  I doubt UltraPro is going to make a special pocket page for these especially since no card storage company has come out with a book card holder yet. I'll probably end up using 9 pockets, sorry getting off topic here. 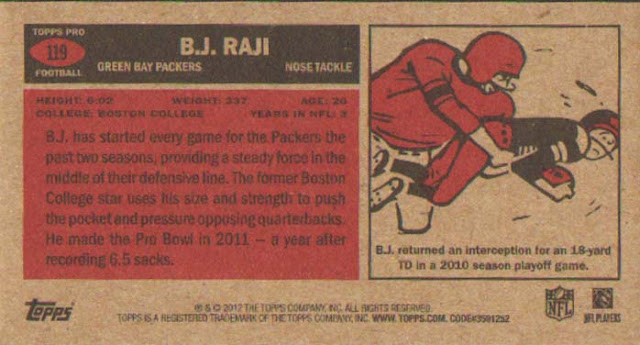 Can you tell I'm a Packer fan?  I love the cartoon on Raji card commemorating what will probably be is most memorable career moment. I still remember that game and the look on his face when he got the ball in the end zone, priceless.

There are also redemption cards for a free pack of Topps Kickoff. 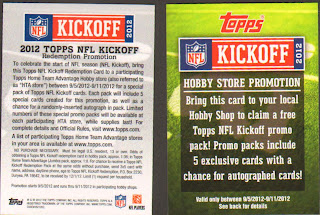 I ended up snagging 3 of these and yes I plan on redeeming all three next week.  Hell there might be auto cards in there!! I'll let you know what I get.
And of course Topps is doing another giveaway. 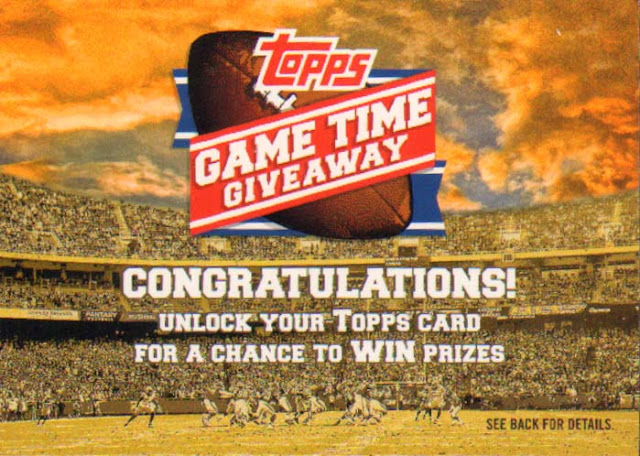 And again since I live in Alaska I can't do it. Oh well these are going for a good price on the Bay right now so up they go. It'll be interesting to see what comes out of this, but since Topps won't send me anything that I win I'm not even going to enter a code. I did manage to come out with 11 of these though.

Now onto the hits!
The whole reason for getting a Jumbo is the 3 hits. 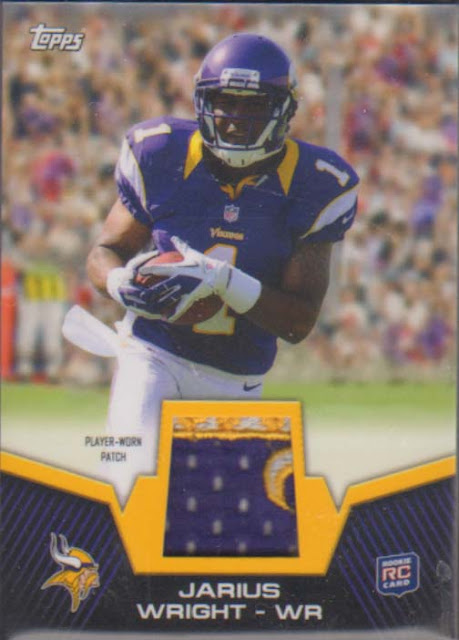 First up we have the Rookie Patch card.  I got one of these last year of Torrey Smith. I have to say I know that this is only player worn at the rookie premiere, but damn that's a nice looking card and patch.  Jarius' cards aren't even being a 5 dollar bill right now, so hopefully he'll have a big rookie season. 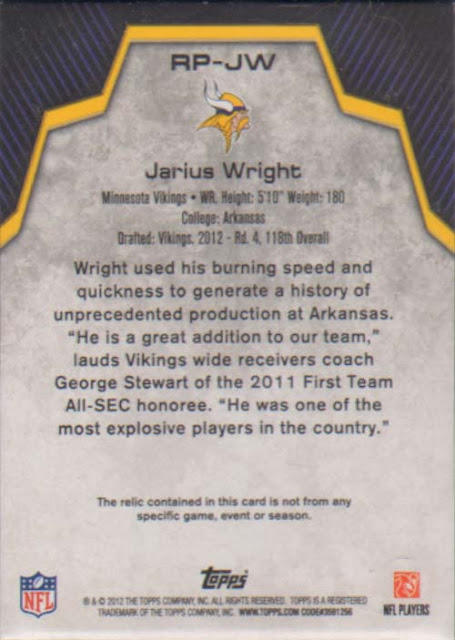 Next up the auto's! 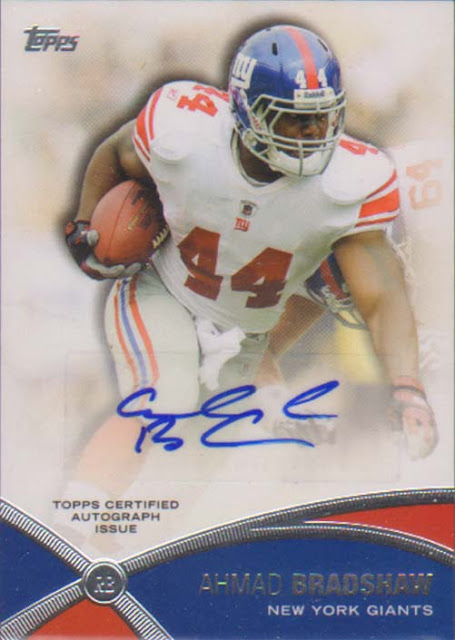 I'm pretty happy with my two autographs.  Both big names. 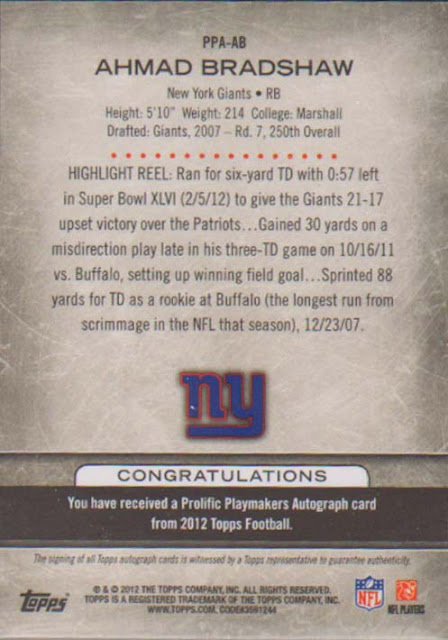 And there's nothing like opening a box of cards and one of the hits is a player you collect or on a team you collect. 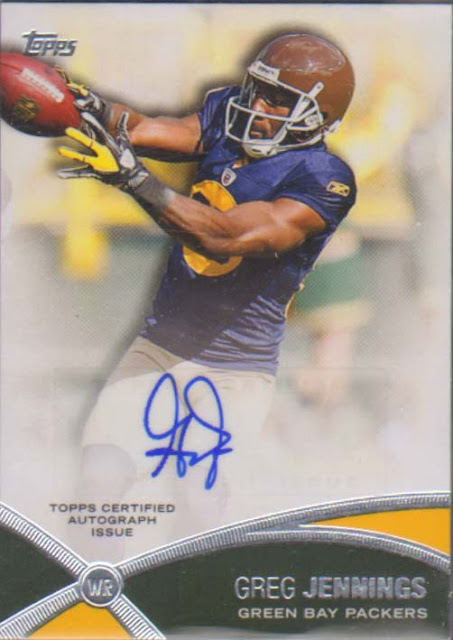 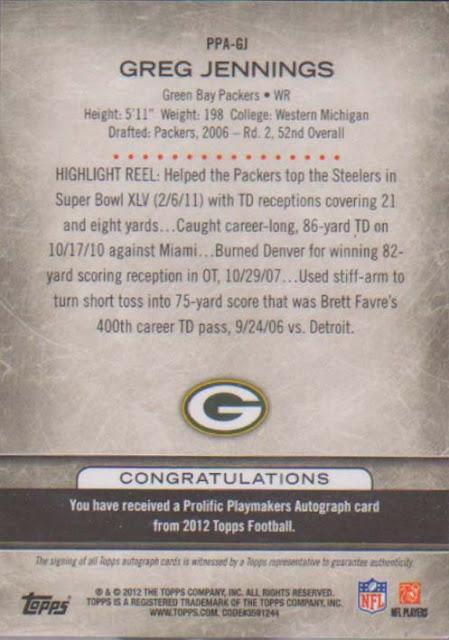 I'm having a hard time keeping me from buying another jumbo of this.  I really like the product this year, but I know that if I buy another box I'll either have 400 extras laying around or have to put another set together. But the last two years I ended up pulling Rookie Premiere autographs so it's tempting.

Anyways, I'm going to keep the hits and the Tall Boys and probably the QB Immortals and the giveaway cards are up on ebay, but the rest is up for trade. I have my 21 card need list up as well, but I have a feeling I'm going to be buying another box of this come Wednesday at trade night or another box of Ginter.
Posted by cynicalbuddha at 8:58 AM 2 comments: 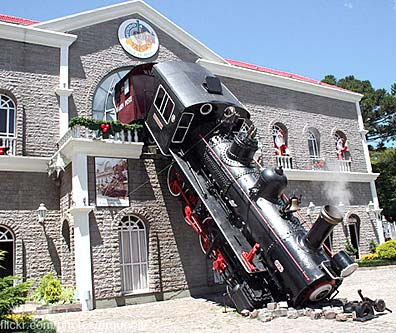 Well I would love to say my field season is over. But I just found out I'll be heading back out in a few weeks for one more trip.  But I just wanted to say I'm back for a while. I'm working on a few posts and yes I'll be up for trading again soon as well.  I just looked at my post history and wow only 2 posts this month and I'm pretty sure those were one's I scheduled back in July.  But I've got a box break and review coming and a TTM to blog about, I'm going to tell you how unthrilled I am after looking at the 2013 Topps baseball sell sheets and other randomness from the great white north.  So stay tuned.  I'm back, at least for a while.

cb out
Posted by cynicalbuddha at 10:14 AM No comments:

It had been quite a dry spell for TTM returns. Ever since my field season started I hadn't had time to send anymore out. But I know I still have quite a few out in the ether.
Well it's always nice to get some cards back.  I actually got these the same day that I got my Will Clark auto back.  That one kind of over shadowed this one, but in my quest for Brewers TTM I'm glad to have it back.

Tom was a starter for the Brewers in 1988, coming from the Blue Jays camp and before that the Cubs.  Tom spent more time in the Minors than the Majors but spent the bulk of his Major League time with the Brewers and was traded to the Mets in 1991. He's currently the Pitching coach for the Indianapolis Indians. 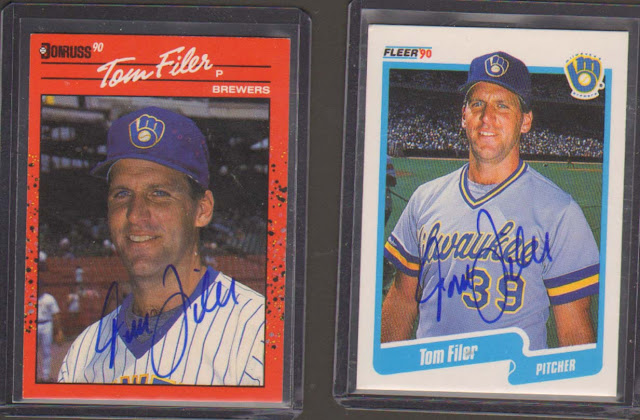 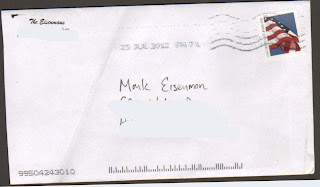 Posted by cynicalbuddha at 12:51 PM No comments:

Another box of Ginter

I ended up stopping into the other great LCS in town, Don's Sportcards. I was going to pick up a few supplies, peruse the drop zone, and see what he had to offer.  When I noticed he had boxes of Ginter marked down to under 90 bucks already I knew I was walking out with one.  I also picked up a few blasters of the stuff when I was down working in Juneau.  I won't bore you with any of the filler just the hits. 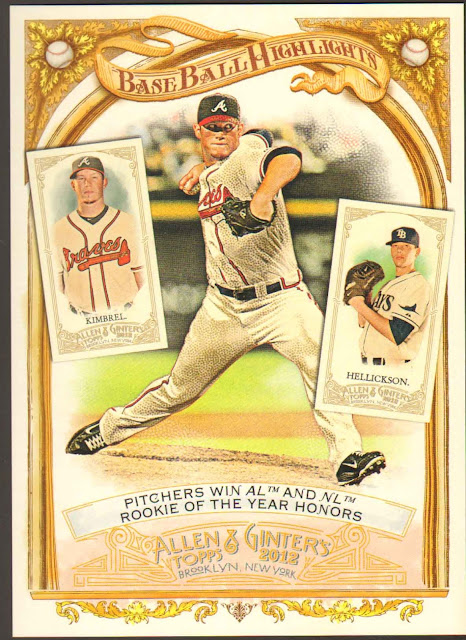 The box topper. This one's probably going to find it's way down to Colbey. 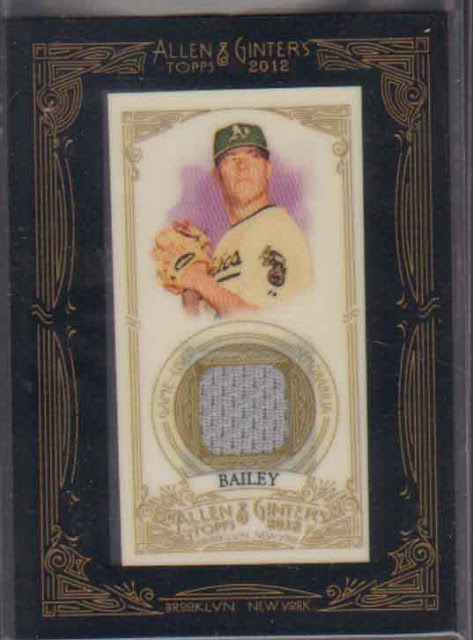 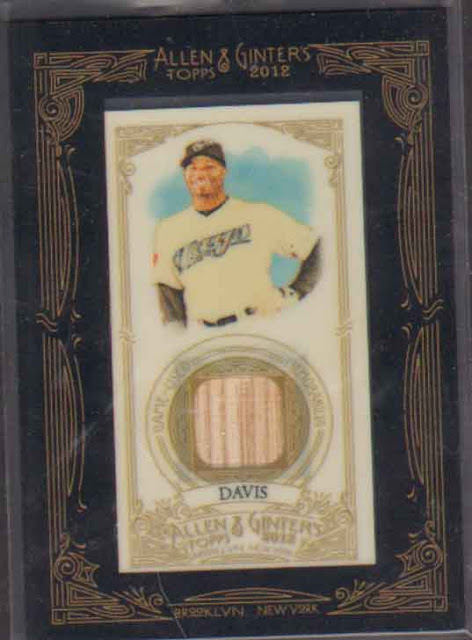 Rajai Davis Bat Relic.  I actually pulled this from  one of my blasters.  Always nice to get something from a blaster. 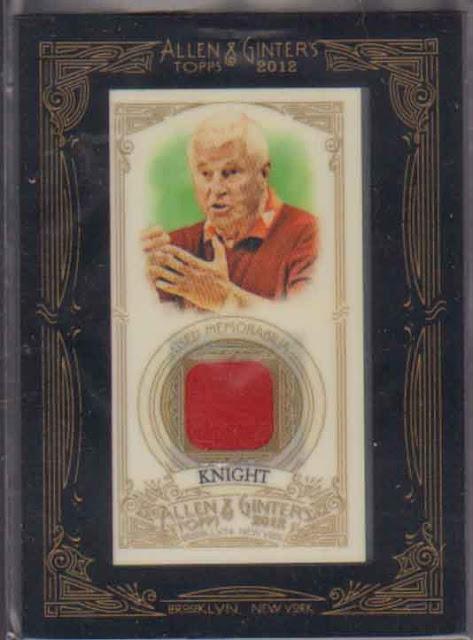 Bobby Knight Relic.  I haven't had the best luck with Ginter this year, but I will say I've pulled some nice relic subjects this year.

And I did manage my first auto. 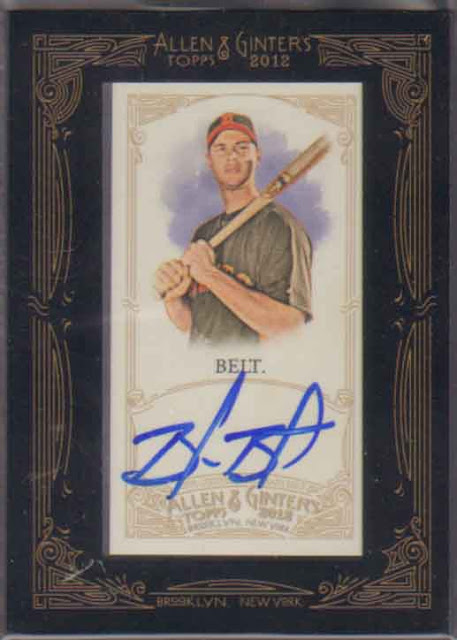 This is my second Brandon Belt auto this year.  I also got his Gypsy Queen auto earlier.

I didn't really get anything else to write home about in the box.  No red back A & G mini's or Rip Cards.
I should have my need list up soon.  But I'm writing this knowing that I won't be in town when it posts.  Sorry guys.  I'm still up for trading and I do have a bunch or extras.  I won't be back in town till the end of August, so put a sticky note somewhere.  I will write a post when I get back and open the trading floor again.  Thanks again.
Posted by cynicalbuddha at 12:37 PM 3 comments: