It's been my tradition now for almost a decade to take the day after Thanksgiving off from work and do my only Black Friday shopping over at COMC.com.  As is also my tradition I've been slowly stockpiling cards over at the site and take advantage of the free shipping during COMC's event.

First a shout out to the guys and gals over at COMC they did a great job packaging my order. It's the first time I've ever warranted a box for my goodies. 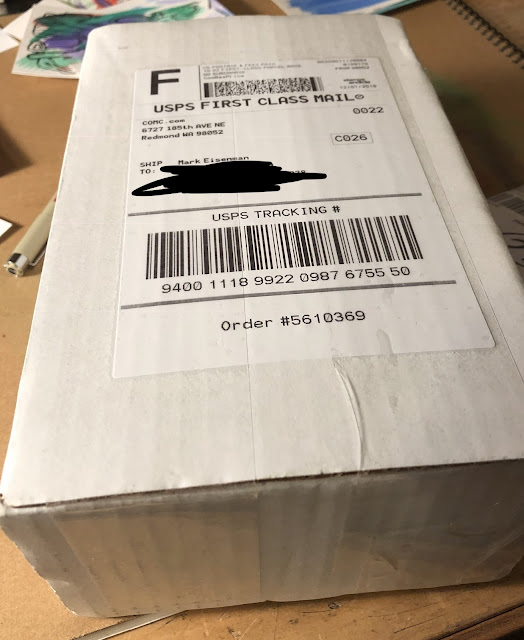 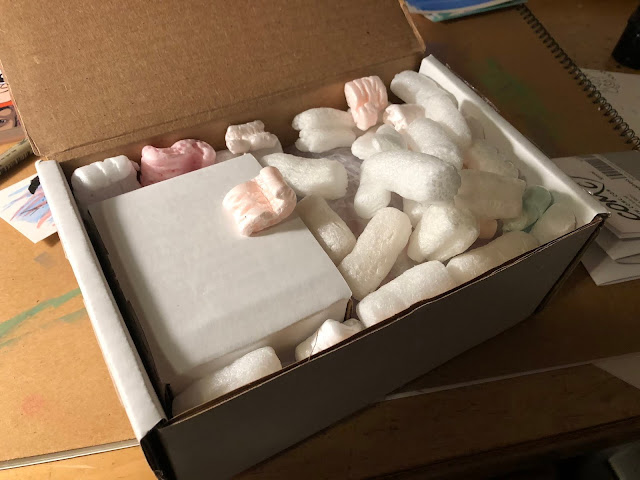 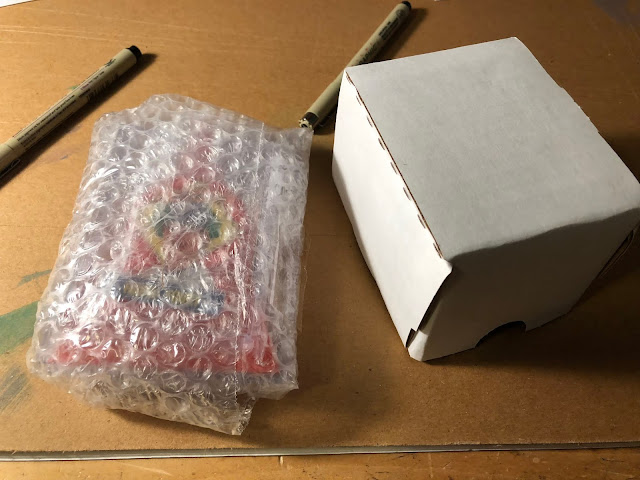 I did get a couple great oddballs this year.  My most expensive item was by and far the 2013 Panini Cooperstown Robin Yount Red Pennant.  I've been looking for one of these since the product came out and while not numbered they seem to be pretty rare and hard to find.  I can probably count on one hand the number I've actually seen for sale and while it was my most expensive item in the lot it still didn't break the bank.  I also finally picked up Robin's 1991 Topps Stand up candy dispenser. 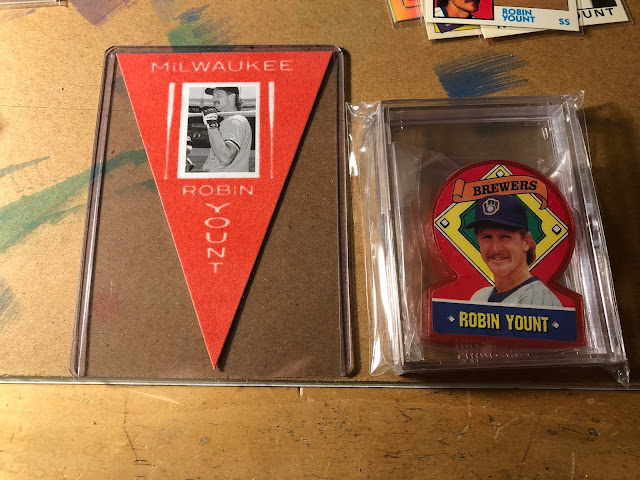 I didn't pick this rainbow of Yelichs this Black Friday.  I preemptively bought the lot of them well before he was named the NL MVP this year. But it's nice to get their shiny goodness in hand.

I also picked up a bunch of great auto and relic brewers cards. I had a Lyle Overbay auto featuring him as a Diamondback it's nice to have one featuring him as a Brewer.  It's also nice to be able to cross off that Braun Marketside off the need list. 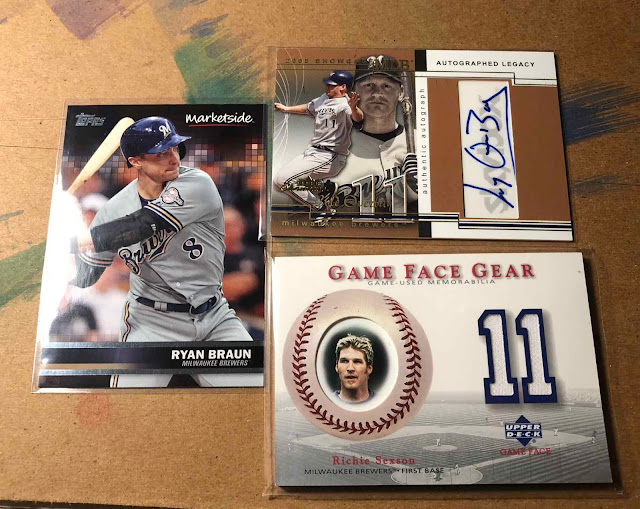 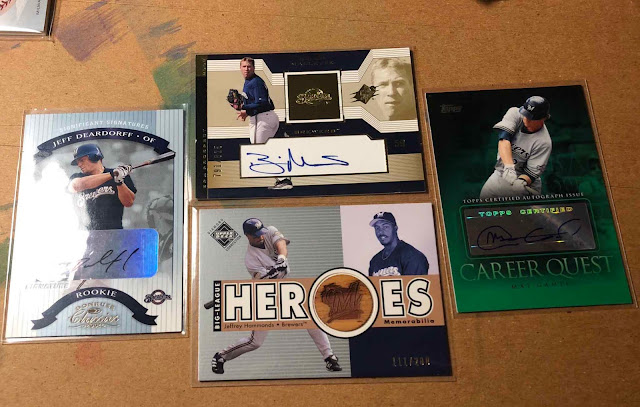 Probably my favorite non-Yount pick up was this 2005 Sheets quad relic auto.  Man I really miss the variety they use to put into some of the products. 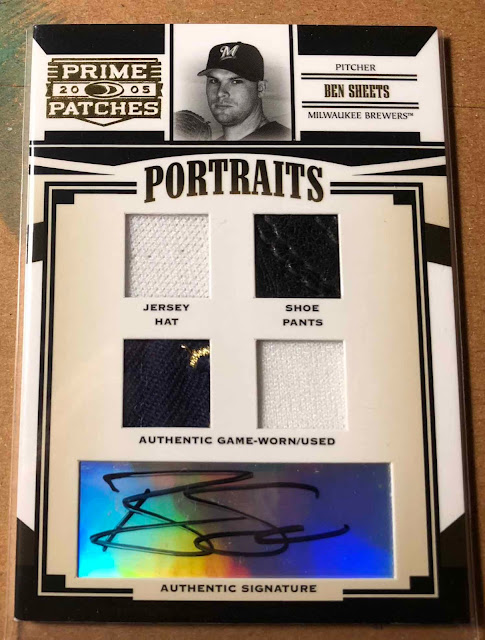 Only added a couple new Packers cards to the mix.  I was really bummed with Jonathan Franklin had to retire after his rookie season.  I saw lots of promise in the young running back.  And his cards even his sweet auto patch cards will set you back a little over a dollar. 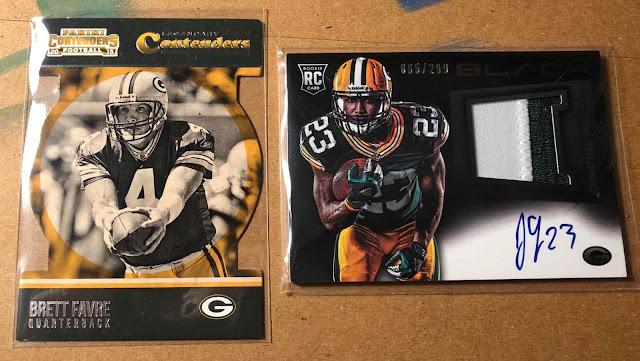 Of course I added 26 new Younts to the collection.  I'm always surprised when I don't have a card you'd think I'd have picked up already.  I picked up the 1989 Fleer Glossy and 1984 Topps Nestle to fill those holes.  And finally got my hands on Robin's 2018 Topps Archives Rookie History card. 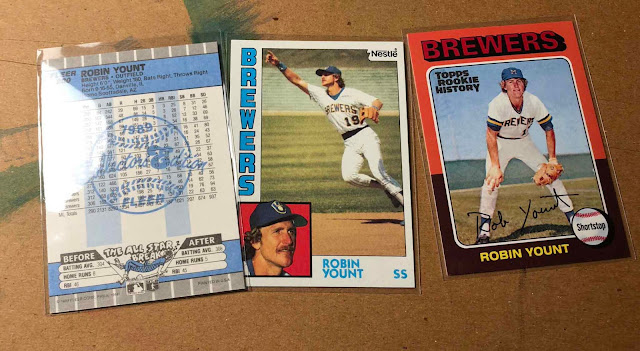 I also finished my 1984 7-11 Slurpee coin set.  This one is the central region coin denoted on the back with an E.  I also picked up Robin 1993 Panini Sticker I didn't have, his base card from 2002 Topps Archives Reserve, his Ballpark Classics insert from 2002 Fleer Authenix, and 2006 SP Legendary Cuts - Baseball Chronology platinum parallel. 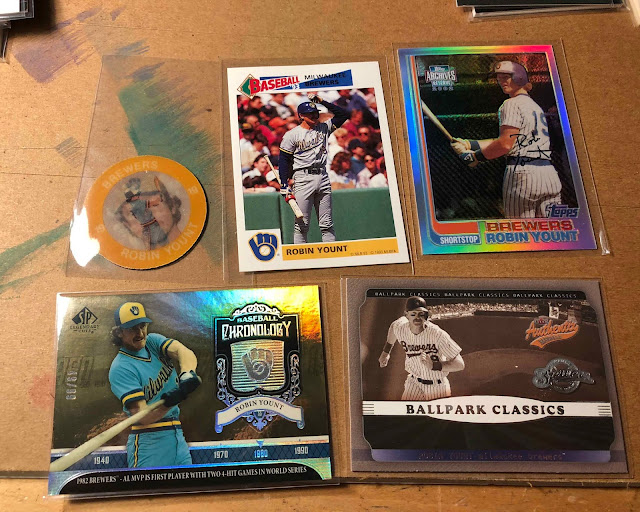 I also picked up the last 3 Topps Tiffany cards I need featuring Robin. 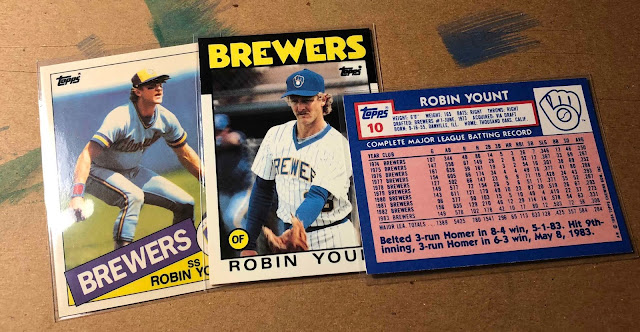 It was nice to get such a big amount of new Younts. Some of these I've been picking up advantageously as they pop up on the site, others I had been watching for quite awhile waiting to see if I could get them at a Black Friday discount. 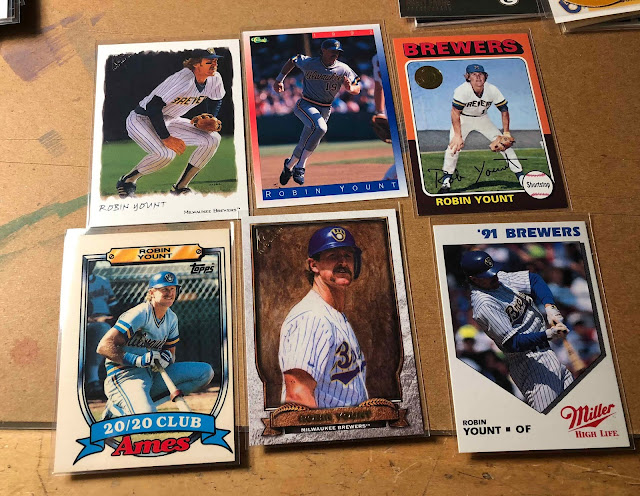 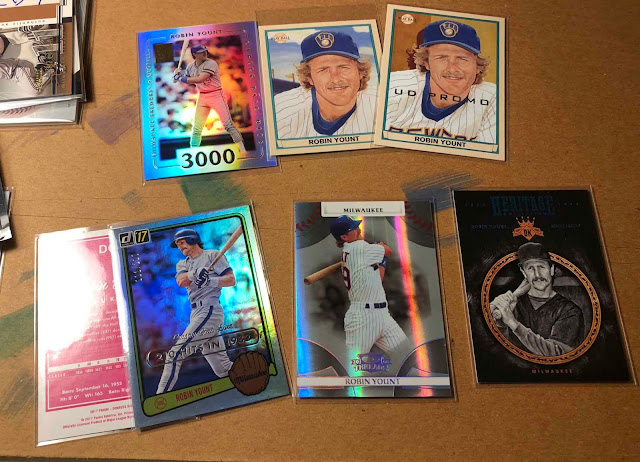 Overall I'm pretty happy with my Black Friday pick ups.  All the Younts will eventually be featured over at the Yount Collector.

Anyone else pick up some goodies?
Posted by cynicalbuddha at 9:08 AM 4 comments:

Still digging out of the rubble up here in Alaska.  Just kidding we're doing just fine.  If you didn't hear we had a pretty big shaker a week ago and while the damage was surprisingly minimal and we had zero fatalities the city is still on edge as we've had almost 2900 aftershocks.  We lost a pot and a picture frame but other wise we didn't have a ton of damage or clean up and the man cave survived with almost no displacement.  But that's not an excuse for my lack of posting, no I have lots of other great excuses for that.  Anyway, while I haven't really felt like blogging in a while I do want to finish up a few trade posts.  This time it's a three in one post with a few mega trades that happened via Twitter.

I like to think there are couple different kinds of trades and trade styles.  There are those trades that are carefully crafted with a surgeon's precision.  One for one trades, a relic for relic, auto for auto, etc.  Sometimes those trades take a little back and forth before both parties are happy.  The other main type of trade is more of what I like to call the shotgun approach.  It's a bulk trade usually involving a team or player.  Here it's not so much quality, although it can be, but it's much more quantity.  I'm an unabashed Brewers fan.  I sometimes post new pick ups or an odd rant on the ole Twitter so it's not surprising I get a few trade requests.

A few months back a fellow Mark @markdwilkns, contacted me if I'd be interested in a bulk trade.  He had a bunch of Brewers he was looking to get rid of and would take any and all Red Sox.  Mark ended up sending me his side first without reservation, which I'm glad, I've had a few bad experiences with blind trades on twitter.  What I got was pure awesomeness.  Three 400 count boxes full of Brewers from the 1980 all the way up to present. 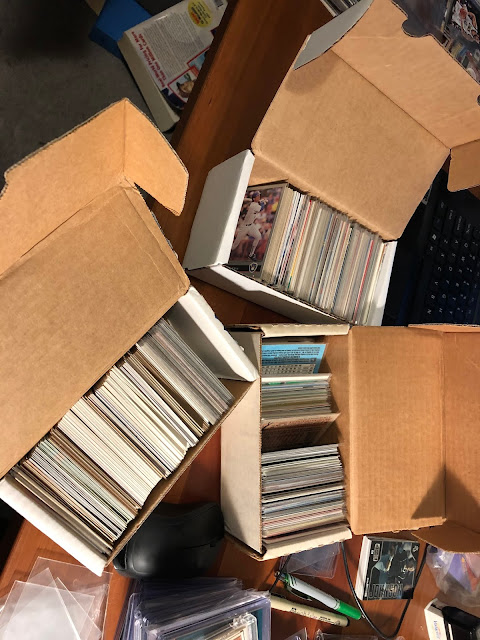 I have a ritual when I when I get a lot like this.  I have over 9400 unique Brewers cards and most of the Topps and other brands base cards, but I sort through the lot looking for inserts and other more premium brands and separate those out to check against what I have logged at TCDB.
What I ended up with was this stack. 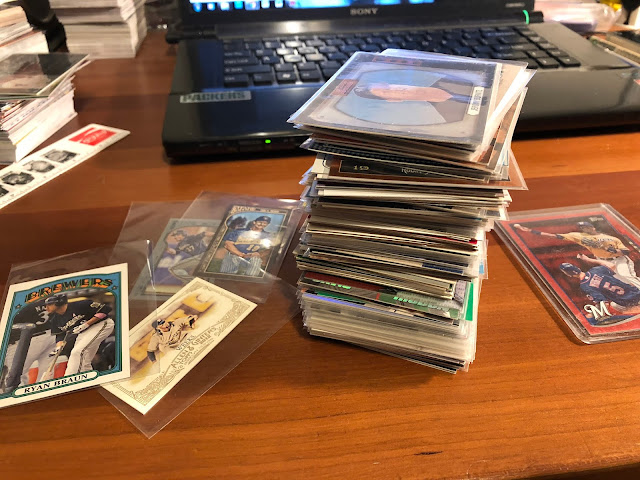 In the end I ended up adding almost 200 new cards or more, I didn't keep very good track.  Here were a couple of my favorites in the bunch. 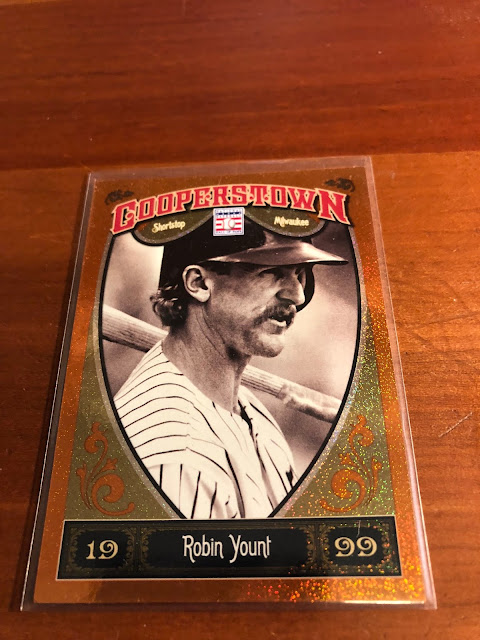 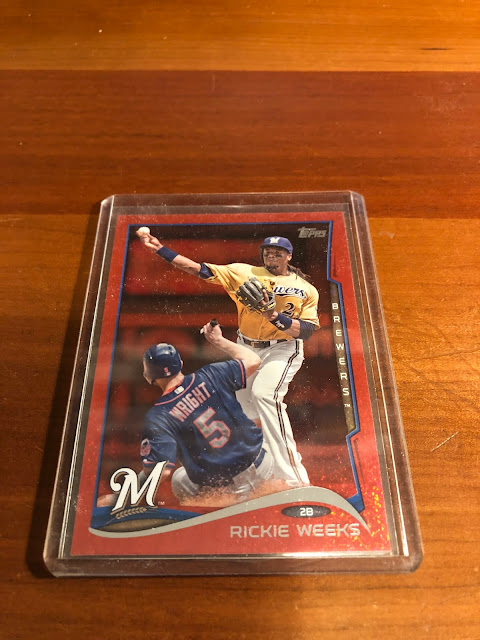 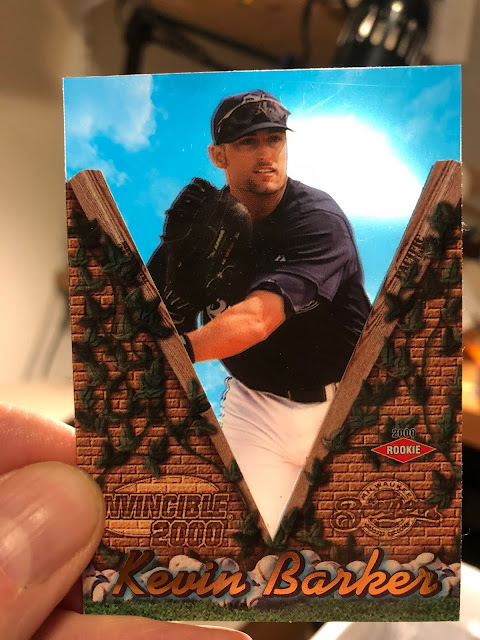 But this trade actually caused my next to bulk trades.  After I posted a thank you to Mark, or was it he posted a thank you to me, Matt @jmswyo asked if I'd be interested in more Brewers.  How could I say no and Matt wanted my extra Royals cards.  Originally Matt thought he only had about 700 cards for me, but when it was all said and done it was closer to 1200.  Matt was honest it was mostly junk era stuff. 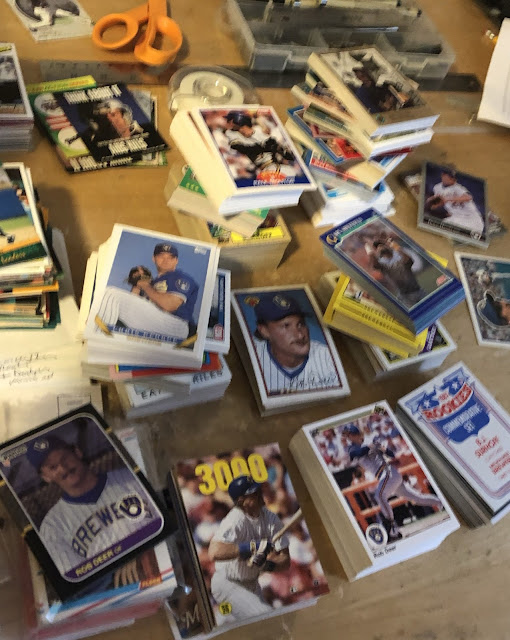 He wasn't lying, but after my usual sorting ritual and cataloging I needed well over 100 of those cards and it help complete quite a few team sets.

My next trade came via Blair @blairrussell1 who also messaged me saying he a slug of Brewers, mostly modern commons to trade.  I was in this deep why not. 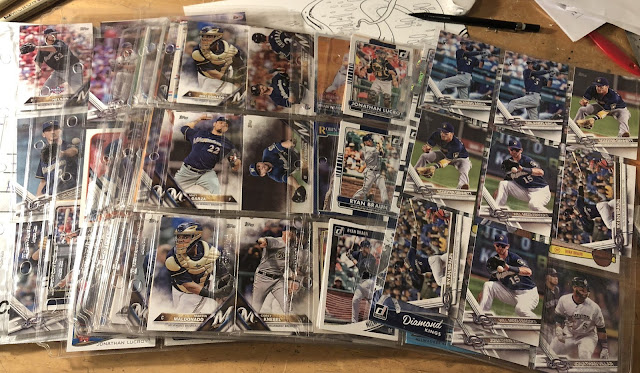 Blair's package was stuffed with 14 9 pocket pages full of Brewers slotted front to back.  While I had most of these as well, after careful sorting I still managed to find a good 20 to 30 cards I didn't already have.

So after my 2500 card trades I had to put the brakes on the bulk trading.  Right now I'm sitting on almost 10,000 dupe Brewers cards, some of which will make there way to fellow Brewers team collectors, but I have a feeling most will be sitting on my shelf for a long time.

Anyways thanks to Mark, Matt, and Blair for the great trades
Posted by cynicalbuddha at 3:39 PM 3 comments: