The life of a blogger, especially a hobby blogger like myself, is cyclical.  You may have noticed my lack of content this year.  This time of year is always a slow time for me blogging because I'm so busy.  Summer in Alaska is no time to sit inside and blog.  But I've been really lax with my posting.  I look at the new upstarts like fellow Brewers fan and Yountophile Tony L over at Off Hiatus and Billy K over at Cardboard History that are pumping out post after post. Ah I remember when I had that enthusiasm.  Even the old guys like the Night Owl, Jeff over at 2x3 Heroes, and Chris at Nachos Grande that keep the posts coming.

But not here.  I think there are lots of things that have contributed to my general ennui toward blogging.  First is the lack of stuff for me to blog about.  Sure I could find stuff to blog about.  Dig through a box of cards, come up with a new theme, or revive an old theme.  But in the end I hate having to force something.  Second is the exclusivity in the sports card market.  Basically this ties into my first point, lack of stuff to blog about.   The shelves are mostly bare with new products and even when new stuff comes out it's way out of my price range.  Third, lifestyle change.  Having a kid really cramps my style, at least for blogging.  Before I had my son I had a room all to myself.  It was a nerdtopia slash art studio and I miss it so much.  Love my son to death, but still miss my space.  Now my computer and scanner are crammed into a corner in the living room and my collections are squirreled away wherever I could find space.

Let me be clear here this isn't my swan song.  I'm not signing off.  As a matter of fact I'm on my blogger account almost daily reading blogs.  And I try to comment, because who doesn't love a little feedback?

But I'm finding I have less energy to blog.  Over the span of the last 6 and a half years I've put out some decent posts.  Well researched and thought out posts.  Of course that's probably 1% of my total content, but there are definitely some posts I'm really proud of.  Now it seem like I have barely enough time and energy to post about a trade or TTM success or my thoughts on Topps Now cards.

Will this change?  What will become of the Crack?  Why did I start 7 different blogs?

In the end I'm not sure about my future in the blogosphere, but I'm not leaving just yet.

And because I hate a post without photos here is my best hit maybe of all time from a random pack pull.  I featured this card and the pack it came from over at A Pack to be Named Later. 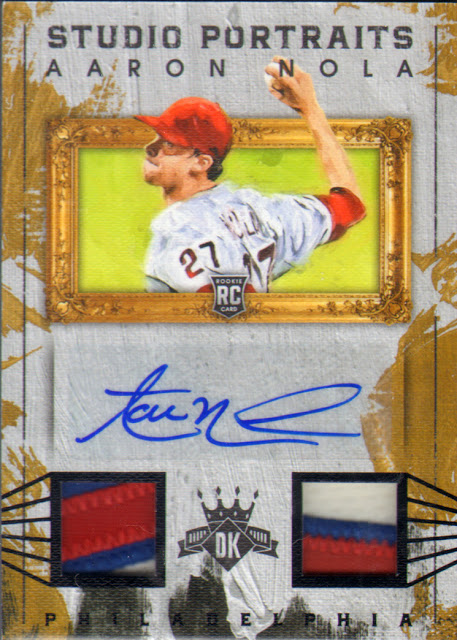 Posted by cynicalbuddha at 9:42 AM 11 comments:

It seems the only thing I blog about now is Topps Now cards and only about twice a month.  When looking over the Topps Now checklist there are a few things that can land you a card.  You could be a rookie named Trevor Story, you could throw a no-hitter, you could be a Yankee (just kidding the Yankees really don't have that many cards in the set).  If your a Brewer all you have to do is hit 3 home runs in a game and one of those has to be a game winning grand slam.  And guess what?  Aaron Hill did just that.  If you read my last post I pulled the trigger on Jake Arrieta's No Hitter card.  I figured there was no way the Brewers were going to featured this year.  I mean they had done a lot of the exact same things that other teams and players had gotten cards for and not gotten featured so I figured I'd like to have one Topps Now for the collection.  I ended up buying this Hill card because I said I would and in all likely hood this might be the Brewers only card of the set.  That being said this will also probably be the last time I buy a ten dollar card off of the Topps website.  If history has taught be anything it's that I should be able to pick up any other Brewers cards much much cheaper later.

Ahem.  So like usual the card took over 2 weeks to get to me.  I notice fellow Yountophile and Brewers collector Tony L. had gotten his Hill card much much sooner.  Of course he could probably just walk over to the Topps printing facility from his home in Atlanta.

The first thing I noticed is how different the packaging was compared to my first card. My Arrieta card was shipping in an oversized envelope folded over, with the card stuffed into a smaller padded envelope and the card was in a card saver.

This time? Well lets have a look. 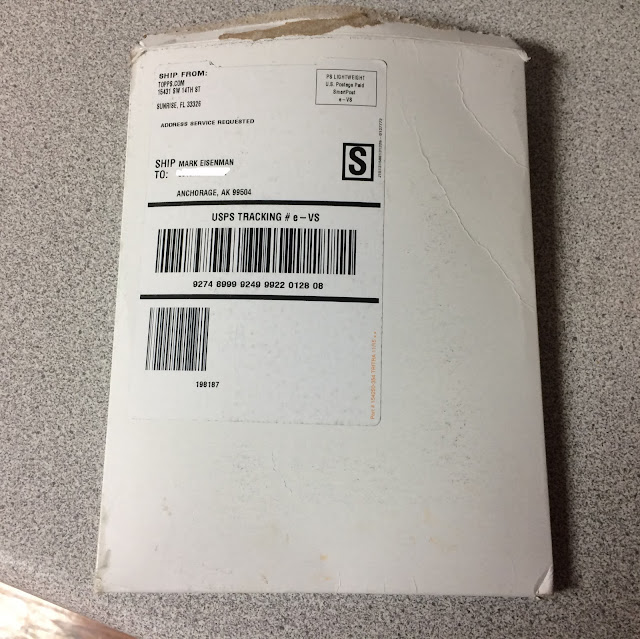 Still a fairly large envelope, but not nearly as oversized as before. 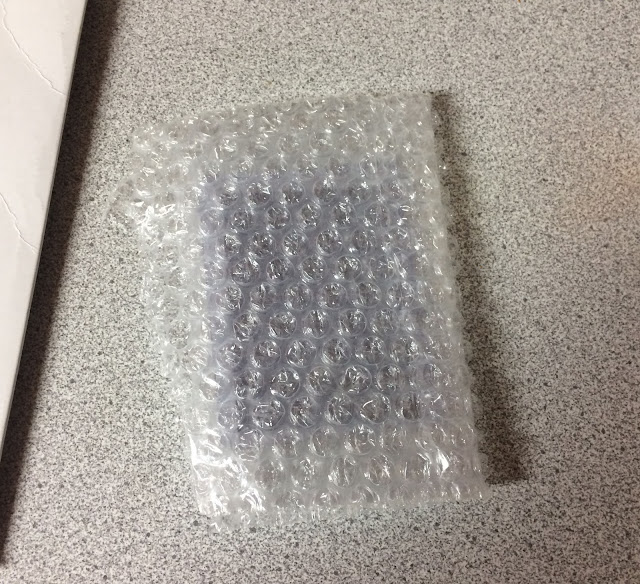 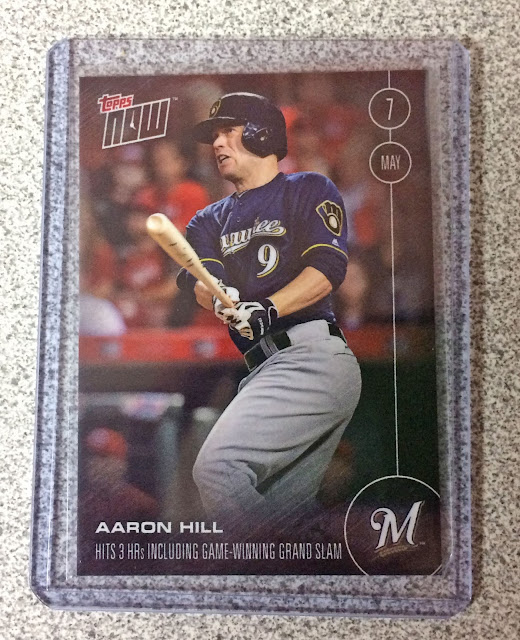 And what's this?  In a penny sleeve and a top loader.  Seems Topps has taken care of my one big complaint from my last card.  Tony also commented on my Arrieta card that this is exactly how his Hill card was shipped as well.  Will this card hold it's value.  Not a chance.  I will say I was surprised the print run, 246, was higher than I thought it was going to be.  I think Tony summed up Hill's Brewer career pretty well you can read it on his blog if you want to.  I won't rehash it.

Overall I like the Topps Now concept, especially how the concept can highlight rookie and release rookie cards almost over night. Still don't like the price.

Too bad Topps doesn't have an NFL license anymore because I think with a little tweeking this concept would have worked great with all the great football highlights that happen from week to week. 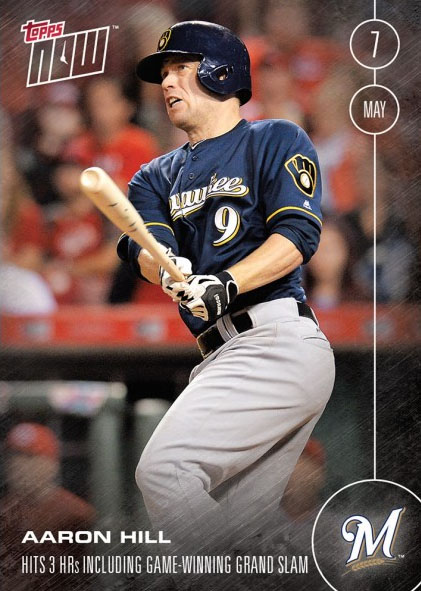 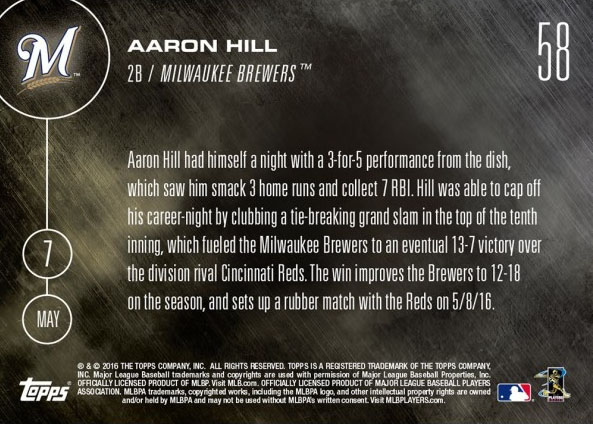 Posted by cynicalbuddha at 8:37 AM 4 comments:

Taking Delivery - Thoughts on Topps Now with a card in hand

Before hell froze over and Aaron Hill had a 3 home run, one of those being a game winning grand slam, day and the Brewers actually getting a card in the Topps Now set, I was pretty sure they wouldn't all season.  So I decided to pick up a card when Jake Arrieta pitched his no hitter.  I'm a closet Cubs fan, not a collector, but I've always had a soft spot for the lovable losers even when the Brewers joined their division.  So I figure I'd share what you get when you order a card from Topps Now.  First off you get an email with your FedEx Smartpost tracking number and an estimated delivery date, that was, at least for my Alaskan address, long into the future.  I don't know much about the Smartpost option but I'm guessing it's FedEx's version of parcel post.  Well I'm happy to say that my card arrived a full 5 days before the estimated delivery date, which was still 3 weeks of waiting.

The first thing I noticed is that the post mark is from Florida, where I guess Topps has a printing facility.  The next thing is the envelope they used, it's huge. 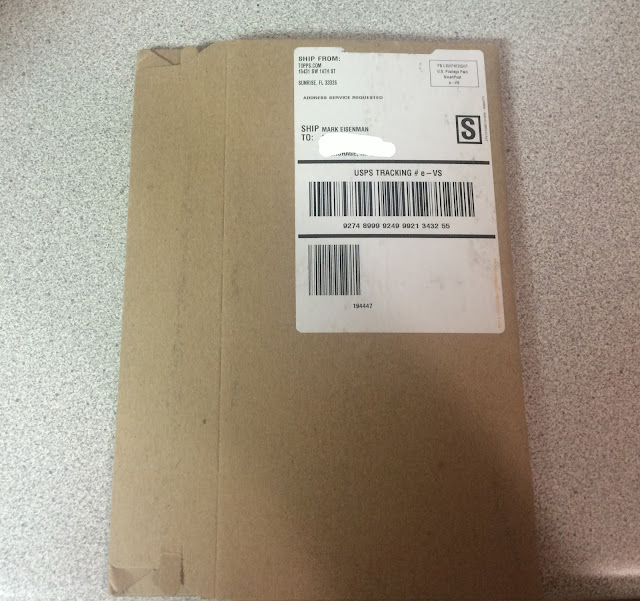 Inside that envelope is a smaller envelope. 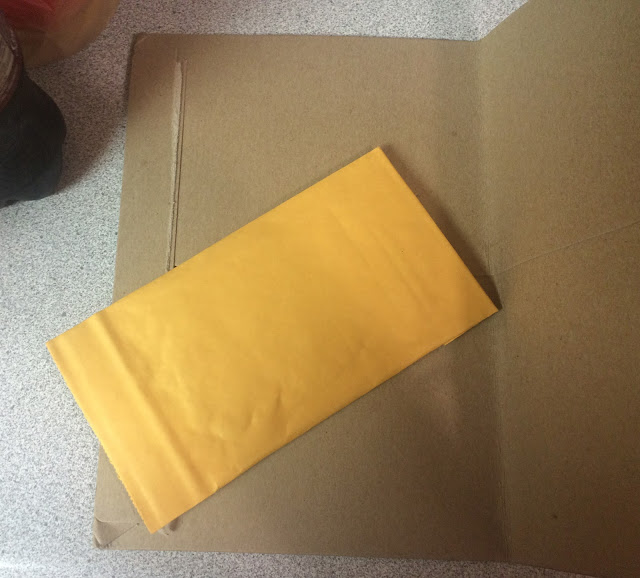 And in that envelope was my card in, ung, a card saver.  No penny sleeve and I could plainly see that the corners were a little dinged most likely from inserting the card in the card saver. 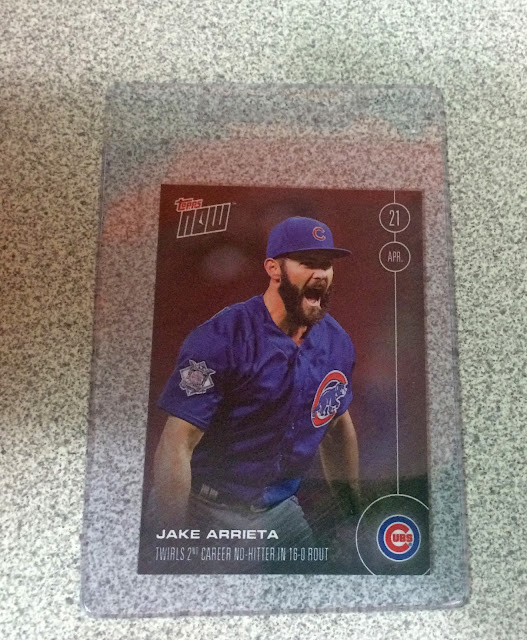 The card itself is very glossy.  I meant to do a gif showing the glossyness, but didn't.  If you're wondering about card thickness.  The advertised 16pt thickness is the same as a standard card you'd pull out of a pack of flagship baseball.   Other than that the card looks exactly like the mock up you see on the website. 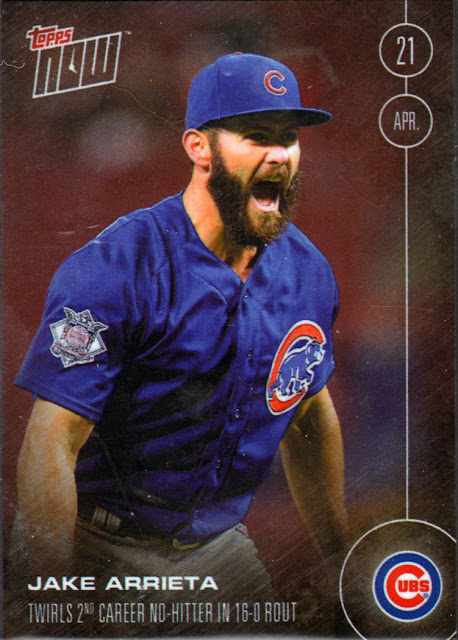 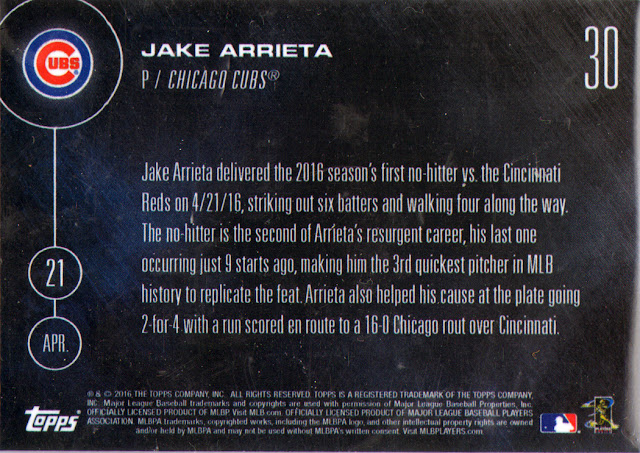 Overall the $9.99 price tag is a little steep, but the card was very well packaged.  I'm not sure what Smartpost costs on a single card, but it seems like some of the packaging is a little overkill and I would much have preferred a card in a penny sleeve and top loader over a card saver.

Well there you go.  That's kind of what you can expect when you order a card from Topps Now.  I'd expect shipping times to the lower 48 would be much quicker than to Alaska or Hawaii.

Oh and I did order an Aaron Hill card too.
Posted by cynicalbuddha at 7:56 AM 4 comments: