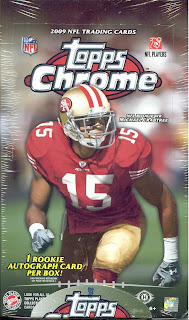 Well as promised I got my 2 boxes of Chrome Football I bought off of ebay from ccardz who i highly recommend. Great service, fast shipping, and great prices and has never disappointed me.

Unlike Topps who seems to be disappointing me at every turn.

So the good the chrome and refactors look so cool and the first box I opened had 2 rookie autos in it.

The Bad I got no rookie auto's in the second box. Boo for you Topps and your misleading " a rookie auto in every box. " And Yes both boxes were still factory sealed. It says right on the box " One Rookie Auto card in every box!!! " not " One rookie auto card on average." They even have and exclamation point at the end of the sentence. I bought two jumbo boxes of update not to long ago and was jipped there too. Got both my autos but not my relics.

Any who, I did get 3 rookie copper refactors numbered to 649 in that box but i don't think that makes up for the non auto. 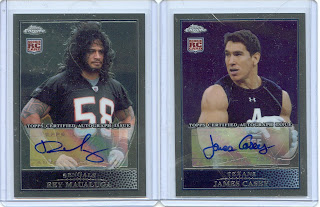 Here are my two autos. And the 4 copper rookie refactors. To Topps credit all the copper refactors where rookies!! Boy Rey Maualuga looks scary in his photo. I wouldn't want to meet him in a dark alley or on the football field. I be honest I got more cool stuff out of the retail blaster box I bought from Wally world. And no Blue refractors here either, although they might be a retail exclusive like the xfractors. 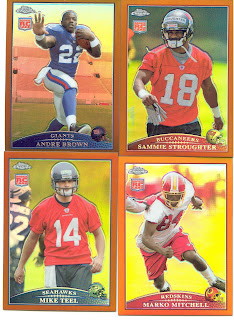 So over all I think it's a wash. I did get 2 autos and lots of refractors.
It also seemed like I got lots of doubles in the boxes too. Well I'm off to do some set building.
Until my box of 2008 Allen and Ginter get here I will remain as cynical as ever.
Posted by cynicalbuddha at 4:18 PM