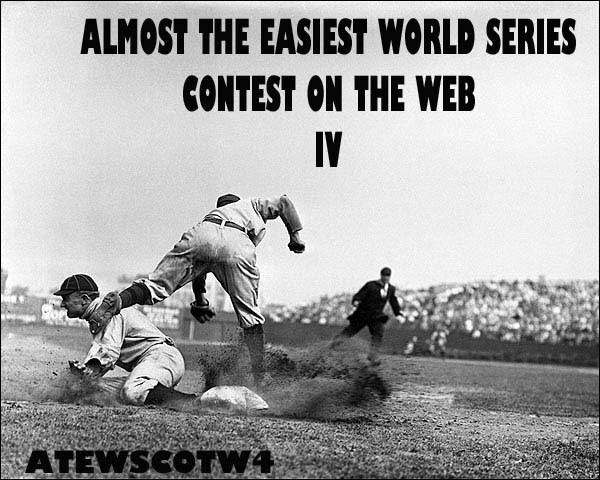 Wow seems like the Summer just flew by.  And while I've had a hard time finding time and things to post about it's still contest time.  The end of summer means baseball playoffs and that can only mean one thing, the Collector's Crack 4th Annual Almost the Easiest World Series Contest on the Web!!!

Been a wild year in both leagues. My team spent 150 days in first place this year and didn't make the playoffs.

Pretty straight forward right?  So what will you win?  Well I've been socking away great stuff all year The winner will receive a great prize package,  plus I'll probably throw in a some cards from your favorite team.  I'll post more on the prizes later after I dig them out.

But wait that's not all.  I will be doing a door prize again just for entering everyone is in.  And if you happen to have a blog and want to promote my contest you will receive an extra entry.  The list will be entered into Random.com's list randomizer and randomized 3 times.

Alright well I have to leave town for one more work trip.  I should be back by Oct 6th. I'm opening the contest from now till next Sunday noon Alaska time, 4pm on the East coast.  That being said I know that there are still the one game wild cards and by Sunday there will already been two divisional playoff games, so you're more than welcome to wait till later in the week to make a guess.

Here are the teams to choose from.

So get guessing. Don't forget to leave a link to your blog if you promoted the contest for your extra entry into the door prize.
Posted by cynicalbuddha at 8:14 PM