I was rummaging around in my box of cool cards looking for stuff I'd want to get rid of maybe and just passing the time till Christmas really.

Now I'm a player collector I have no reservations about that.  I love me Robin Yount, Rollie Fingers, Reggie Jackson, and yes still Brett Favre.  I'm also a team collector.  Being a Wisconsin boy I like to collect the Brewers and Packers.  Not necessarily team sets but unusual cards ect.  I just happened upon this card not to long ago on ebay. 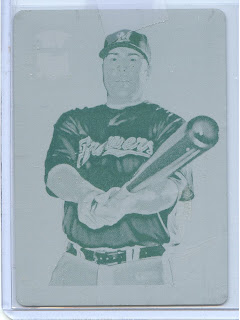 This is the cyan printing plate for Brad Nelson's card fromt the 2009 T 206 collection.  I feel like I stole this card when I got it.  I literally only paid 5 bucks for this 1 of 1.  Yes it's Brad Nelson, yes it's the brewers but hey cool is cool.

Next my rummaging brought me to these two cards. 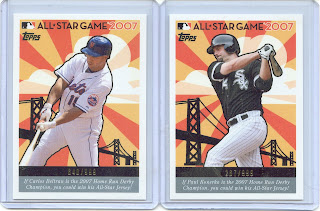 These numbered cards are actually entry cards from the 2007 Topps Baseball for the Home Run Derby Contest.  The grand prize was for a game used jersey from the game.  You don't see too many of these.  I pulled these from a couple wax boxes I bought cheap long after the contest was over.  If you can't tell who they are it's Paul Konerko and Carlos Beltran both numbered to 999.

Then I found one of my most favorite pulls EVER!! 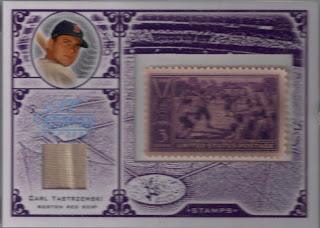 I'm not a huge Yaz fan, but this card is Awesome.  I pulled this from a pack of Leaf Century way back in 2005 and after I saw it I knew this would be in my collection forever.  It's got a 70 year old baseball centennial stamp and a piece of pants with a seam and all numbered to 39!! I know all those Red Sox Fans are Jealous!  The guides put it at 40 bucks but I've never seen one on ebay.

Next  I pulled out some pulls from this years Upper Deck baseball. I can't remember which if any series it came out of but since this is Upper Deck 20th anniversay they are doing lots of stuff to celebrate.  From a huge insert set that many claim has some of the worst cards ever made in it to these buyback cards. 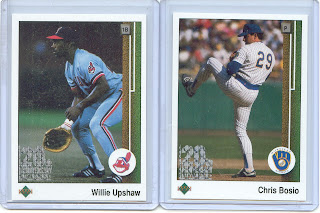 I also got a Mark McGwire that I posted on ebay and I was shocked that it went for over 40 bucks!! But I haven't seen the insert ratio of these cards if they inserted the whole set or just select cards.  They can't be too rare I pulled 3.  The two I still have are the Upshaw and Chris Bosio that's in my Brewers collection.

And lastly but not leastly and hopefully one of this years HOF inductee's the Hawk!! 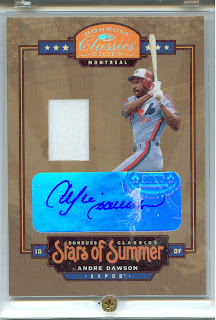 Like I said before sometimes cards are cool enough that you just have to keep them.  I only wish that the jersey had some color in it.  Another great pull from 2005.  This is from the Donruss Classics.

Well that's all I got.  Until next time keep collecting.

Posted by cynicalbuddha at 6:11 PM