So my girlfriend is complaining about the clutter in my "man cave" which is really just a corner of the bedroom I'm taken over as mine.  And so I spent most of this afternoon cleaning up cards, organizing, sorting, and really having a great afternoon.  And along the way I found somemore great cards I thought I'd post.

First I'm putting away some football cards and find this gem from 2005.  As as matter of fact all these cards were from 2005 and were pulls I got.  I was buying a lot of wax back then and not as  many boxes as now.  The thing is back then I was living in Anchorage and had access to card shops and so i'd stop in and buy a pack or too.  Now living out in the middle of nowhere it's just easier and cheaper to buy boxes online.  But I digress. 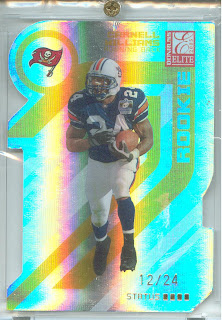 Here we have a 2005 Donruss Elite Carnall "Cadilac" Williams rookie die-cut gold parallel numbered to just 24.  Never seen this card offered for sale online and the guides don't price it do to the scarcity but I check the Tuff Stuff price guide and his regular rookie is around 20 bucks so there you go.  Too bad he hasn't really done much to stand out in the NFL.

Next we have another awesome pull.  I almost fell over when I pulled this back in 2005 and then almost sold it for 200 bucks to a rabid Dolphins fan but unfortunatley the deal went bust and I have since held onto the card. 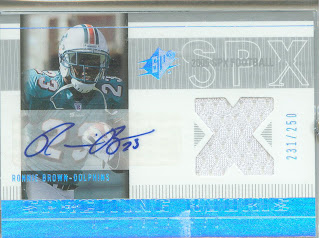 Why it's none other than a 2005 spx Ronnie Brown Auto/Jersey numbered to 250.  I really wish I had unloaded this back then no you can buy them for about 60 bucks on ebay probably less if your patient.  But still a cool card.  And my first Jersey/Auto card too.  I also pulled a another jersey auto from the same shop, a Ryan Moats.  I ended trading it to the shop owner for more packs of spx. He had a guy he knew that would buy it.  I think I got the better deal I know I got more than 20 bucks worth of packs for it so that's cool.

Now on to baseball.

I still had some cool stuff left over from the other day's digging too and here is another really cool card from a HOF I pulled back in 2005. 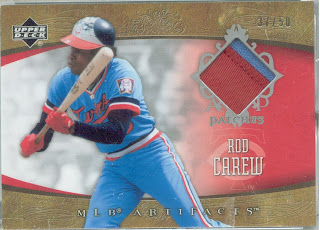 I really like the design of the artifact cards.  Nice large picture of the player, in this case, the great Rod Carew.  And look at the piece of jersey.  Small, yes, but a huge 2 color with stitching.  Numbered to 50.  Wow what a great card.  And from his days with the Twins.  A little closer to home.

Finally I end with this little gem. 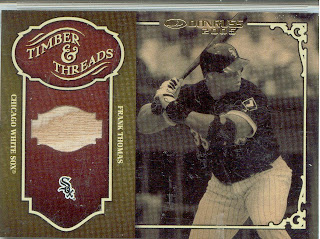 Kinda a let down I know but it's such a great eye pleasing design.  I really like the old Timber and Threads stuff.  Plus I'm a Frank Thomas fan.  He's not a player I readily collect but I do seem to have a lot of his cards and rookies.  Which sadly are really cheap to pick up.  Oh the ups and downs of the "Big Hurt".  He was so fun to watch.  I like the nice big picture and old timey border.  Too bad this one's not numbered, but still a nice piece of bat in there.

Alright one more why not.  In honor of the 206 craze going around now it seems.  I haven't bought any of the new stuff.  Still want to.  The reviews have been good I'm just waiting till after Xmas I guess.

But back in 2002 Topps put out a nice set of 206 and I bought a lot of it.  I must of busted like 4 boxes.  And got some great hits.  A Joe Mauer Rookie Auto and Barry Bonds jersey, and this. 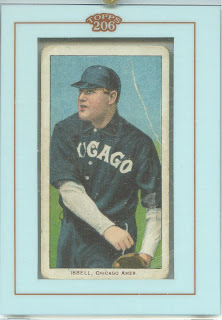 It's a Frank Isbell buyback card.  Nothing like getting a hundred year old card to add to your collection. Who cares if the cards beat up and a player no ones ever heard of.  Almost makes me want to break it out of it's Topps shell to be all by itself.  It also as a Red Sweet Caporal back.

Until next time. happy holidays

Posted by cynicalbuddha at 4:54 PM