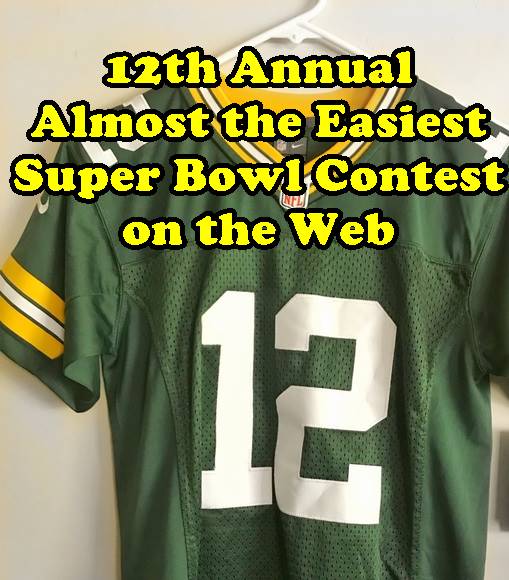 Wow, another season gone in the blink of an eye, and we even got an extra game.  But that means it's time for another one of my Almost the Easiest Contests on the Web!!!  I can't believe we are already on my 12 Annual one.

Same rules as always. I just want you to tell me who's going to win the Super Bowl.  That's it.  Well...in all likelyhood more than one of you will guess correctly, so we are going to need a couple tie breakers.

So I also want you to tell me who the opponent will be, the Total combined number of points (both teams remember, and closets get's it this isn't the Price is Right)  and just incase we need one more tie breaker how many total field goals in the game (again both teams combined)

Now I know you're asking, "Hey CB what am I going to win?"  It never fails that if I was to offer up a prize it would not be to everyone's likely so just like my last World Series contest I'm going to make a prize pack specifically crafted to the winner, based on their team(s) of preference.

But wait there's more.  Like always there's going to be a door prize, just for signing up!!  And the door prize will also be crafted for the winner.  And if promote this contest, on your blog, twitter, YouTube video, or what ever tube you use.  You'll also receive an extra entry into the door prize contest.  But Please Please Please make sure you let me know you did it and a link to the pimp would be great.

OK there you go.  You have until Noon Alaska Time/4 pm EST on Saturday January 15th to enter, right before the Bengals and Raiders game.

Here are you choices: