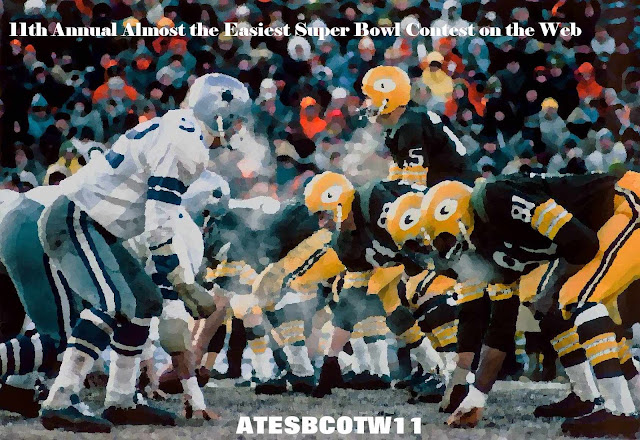 Wow did this season blow by.  I was going to say how cool it was the last game of the season still mattered, but man that game was a stinker, and it did matter for the playoff picture.  And with the end of the regular season comes my annual Super Bowl contest entering its second decade!!

As always I just want you to tell me who's going to win the big game.  That's it.   Well not quite, I'm sure more than one person will pick the correct team so let's set up the tie breakers.  Tell me who will be the opponent, the total points that will be scored by both teams and how many field goals will be made.  So your entry should look something like this.

If for some reason we still have a tie the winner will be determined by random selection.

And like year's past there will be a door prize just for showing up.  And if you promote this contest on social media, your blog (if you have one), or some other way, let me know by adding a link to your promotion and you will get an extra entry into the door prize drawing.

So what's up for grabs this year??  Well as always a stack of your favorite team, could contain autos, relic, parallels, it all depends on what I have on hand or find on my next trip to the LCS, but also this beautiful eTopps of the Sheriff Peyton Manning from 2004. 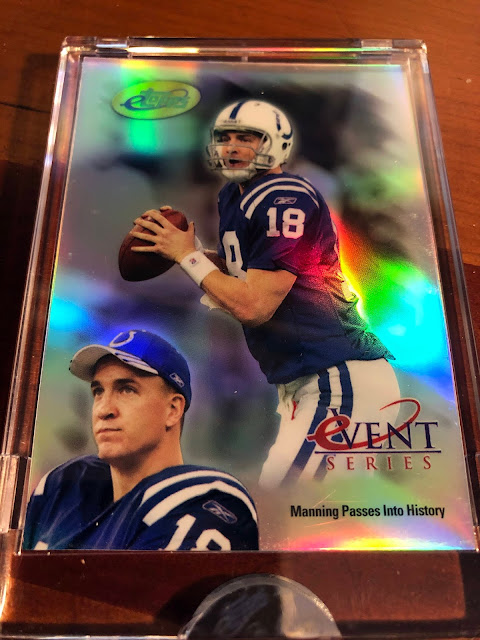 The card commemorates his record breaking 2004 season in which he broke the single season touchdown record set by Dan Marino in 1984. Peyton's record would be broken by Tom Brady in 2007, but Peyton would reclaim the title in 2013, which he still holds with 55.  The card has a print run of just 2844.  I miss eTopps, I'm really surprised Topps hasn't tried to resurrect the brand especially considering the eTopps website is still up and active.

The contest will close at 8am AST or 12 noon EST on Saturday Jan 9th right before the first wildcard game.

Alrighty here are the teams to choose from:

There you go, good luck everyone and don't forget to share the contest to get your extra door prize entry.

Posted by cynicalbuddha at 7:01 AM