I started this post, well not this post, but the first draft of the topic of this post almost 4 years ago.  I wrote a fairly long post and then didn't hit the publish button.  I thought I'd let it cool and then go back and edit the post, maybe see if I'd missed anything I wanted to hit.  And then kind of forgot about it.  It got buried under other posts and other drafts and lost.  I actually found the old draft and reread it.  It wasn't bad, but there was a lot that had changed, timely content that's meaning had been lost, so I thought I'd just start over, because the topic is The Rules.  More exactly the rules about collecting.  And the only rule about collecting is there are no rules. Well other than those that we impose upon ourselves.

In essence the post is about how we each define our own collections and collecting habits.  What we decided to include and exclude.  Let me say I'm no psychologist so take what I'm about to say with a grain of salt.

First let's make sure I make this very clear:

THERE IS NO WRONG WAY TO COLLECT!

With that I could probably just end the post.  But let me try to define a collector in the broadest sense of  the term.  A collector is a person that accumulates things, usually with an underlying theme, bring them together for their enjoyment.  Now is the guy who waits in the card aisle at Target so he can buy the enter stock of Mozaic and jack up the price on the secondary market a collector?  No.  Is the guy who buys a few blasters of Mozaic, opens the packs, selects the cards he wants, and then sells the rest a collector?  Of course.  Selling trading cards does not not make you a collector.  And I will say this, as both a guy who's sold his fair share, almost all the money I've made selling cards I didn't want has gone right back into the hobby.  Ahem.

Collector's tend to fall into a few categories, just by the way we decide how and what to collect.  You may find yourself in just one category or many, maybe even all of them.  This example will pertain specifically to sports cards, but it could be modified for just about any collecting topic.  I'm going to start from the broadest type of collector and work my way down.  And remember these are just my musing and definitions on the subject.

The Sports Collector:  A collector that specializes in collecting one or more sports.  Of course this can also include non-sports topics as well as like Garbage Pail Kids, movie sets, and comic book sets.

The Team Collector:  The team and sports collectors usually go hand in hand. Most of us don't collect everything from particular sport.  We usually focus on a favorite team or two.

The Player Collector:  Again there can always be overlap between types of collections.  But also a player collection can be completely outside a collector's normal collecting theme.  Let's say you collect Tigers cards, but also focus on Brett Favre football cards.  Also while being a team collector you may focus on a specific player from your favorite team.

The Set Collector:  A collector that likes to put together base or insert sets.  Usually focusing on specific sports and/or brands.

The Hit Collector: A collector that collects "hits".  Hits being defined as the added value content from sport card products.  Namely autographs, relics, serial numbered cards, parallels, etc.  Which leads us into the...

The Refined Collector:  There is probably a much better title for this, but in my mind it's the type of collector that is very, very selective in their collection.  Almost sometimes to the point of having a very well curated collection.  This would be someone who targets high end autographs, relics, vintage, perhaps with graded examples.  They maybe focusing on a long (or short term) investment.  (We can argue about if prospectors are collector's, but I'm not going too).  But these collections are usually small, but cards in the collection are very meticulously chosen for inclusion.

The Vintage Collector: A collector that focuses on vintage cards (define vintage however you like).

The Theme Collector:  This is a collector that usually within the constrains of another part of their collection they've decided to start a collection with a theme.  Like collecting baseball catchers, collecting cards that feature plays at the plate, card that have referees in the background.  This would also cover collectors who make Frankensets.

And lastly I have a hard time coming up a type of collector for this.  And maybe it's not so much a collecting type as an allowable exception we make for our collections.  Let's call it the

Oddball Collector:  Not a collector of oddball cards (I mean I guess it could be), but rather this refers to cards we have in our collection that fall outside the rules we impose upon ourselves.  I call these cards my Keepers.  Card that really don't fit in my general collection or collecting style, but are cool, maybe they have some sentimental hold.

As you can see the categories I came up with are pretty broad and under each of those collector's tend to refine their collections even more.  Also, and I'm just speaking from my personal experience, our rules and habits tend to change over time, sometime shifting completely or become more refined and restrictive.
In the end though these are still just rules and usually very loose rules on how, why, and what we choose to collect.  But I bet if you sit down and think about your collection you'll probably find yourself in here somewhere to some degree.
I've been collecting since I was about 14.  So yikes that's been over 30 years now.  I fall into multiple categories and some of those categories merge into each other.
I'm a sports collector focusing mainly on baseball and football, but I also love non-sports sets.  Under that I collect Brewers and Packers cards mainly.  I also have focused player collections under my team collections, my two main player collections for the two sports being Robin Yount and Brett Favre, but I also PC a couple guys outside my team parameters, like Reggie Jackson and Frank Thomas.  All card types from my team and player collections have a place.  I also consider myself a set collector although now I've refined  my focus to mainly Topps flagship baseball (including update) and when Topps had football a flagship football set.  I stopped set collecting football when Panini got the exclusive license (for the most part).  And I have a bunch of oddball cards, my Keepers, that have a place in my collection as well.  Like this sweet Rod Carew Patch card: 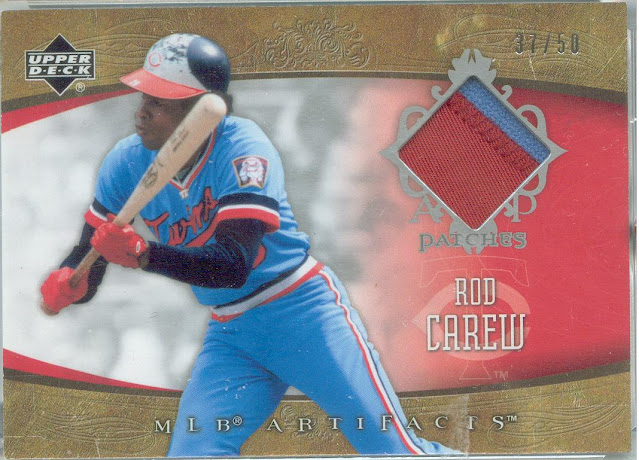 I'd love to know what rules you use for you collection.  Do you have any crazy ones? Also if you think I missed anything leave a comment and tell me what it was.

In the end your collection is yours and meant to bring you enjoyment.  So here's too all my fellow collector's and all your crazy rules.

Posted by cynicalbuddha at 4:18 PM