I know I already made a hasty post on Friday night after the Cardinals won the 107th World Series, but lets rehash the whole thing for posterity and for something to do.

OK. Well we had a fairly good turn out, not as good as I'd had hoped, but 21 ain't too bad. I suppose if I'd had made you all pimp it for extra entries or something I might have gotten more, but I don't care.  I simply asked which team would win the World Series.  Then I asked for the opponent, number of games in the series and total home runs for the series (both teams combined) for tie breakers.  And like I said before we didn't need to go to the tie breakers because only one intrepid blogger picked the right team.

Here's what you were playing for 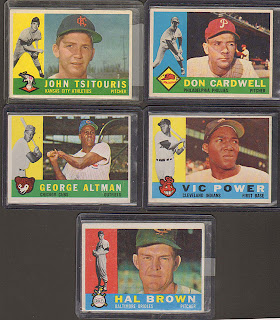 Five nice, but not spectacular, vintage 1960 Topps Baseball cards and a stack of cards from your favorite team.

Here are the 21 original entries if you don't remember what you picked.


The official winning guess would have been this one with all tie breakers correct.
Cardinals over Rangers in 7. 17 Home Runs.


And of course only Colbey from Cardboard Collections picked the right team.


I just got the last address I need from Brian over at Play at the Plate.  I decided to give the other two finalists a nice stack of their favorite team as well.  So all the prizes should go out tomorrow or Wednesday.


Thanks again everybody who participated and congrats to Colbey.
Posted by cynicalbuddha at 12:19 PM

Labels: almost the easiest world series contest on the web