If you're a crappy insert card and you die does anyone notice?

I forgot to mention, I later added an edit at the bottom of the post though, the conspicuous absence of a certain insert in this years Topps Baseball that I haven't seen mentioned.  So I'm going to mention it.

This year Topps has finally killed Toppstown!!!  (A cheer goes through the crowd.)

I can't remember anyone ever saying anything good about Toppstown, myself included.  Let's face it, it was a pointless insert aimed at kids who have better things to do than try and collect and trade virtual cards. Maybe it's because there was no prize, maybe it's because the code card counted toward your total number of cards, whatever the reason, it was probably the most hated insert of all time.

First a little history.  In 2008 Topps introduced Toppstown.  It inserted code cards, like this one... 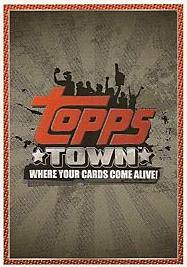 ...with a code on the back, in 2008 Topps Baseball.  You went to the website, set up an account and entered the code.  The code got you a virtual card that was put in your virtual folder.  There were also gold Toppstown cards worth 4 virtual cards.  The goal was to complete the set by entering codes and trading with other users.  Much like their giveaway sites.  It must of had some kind of success because Topps decided to keep putting these cards in to Baseball and then Football for 3 more years!  Here's the main problem.  There's really nothing on the card it's pretty plain and once the code is entered it's worthless. It has no collecting value what so ever. How it made your cards come alive I'm still trying to figure out too.

So in 2009 Topps figured out that if you put a player on the card consumers would bitch less. 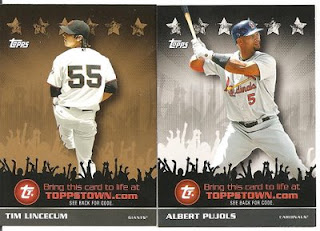 Put big name stars on the cards and they become collectible. A step in the right direction.  I tried Toppstown when it first came out, and I have to say it's just plain dumb.  I couldn't even see this interesting me if I was 12 let alone in my 30's.  Again Topps had the Gold Parallel cards.

In 2010, Topps changed it up a  little bit by having a different photo on the gold version from the base version. 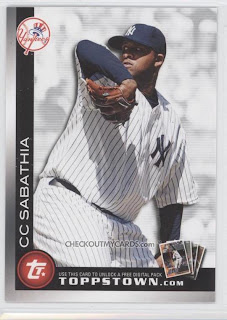 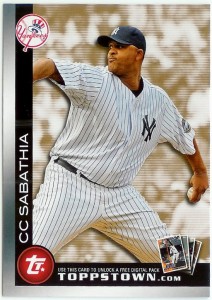 In 2011 Topps went all Panini on the insert and made it a foil board card and got rid of the gold parallel. 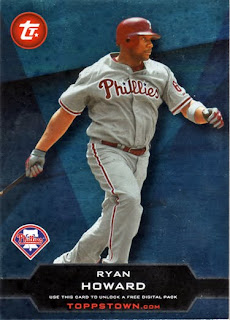 Topps also was adding codes to Attax and Opening Day.

Did collector's care at all about these cards?  From what I've read from all of you, no. At least not for the codes.  Adding a player to the card made it collectible for team and player collectors and for the few collectors that attempt master sets, but I'm assuming the reason they got rid of it was the same reason they stopped eTopps. Lack of interest.  I'm sure persistent bitching helped too, but we all know Topps doesn't tend to listen to our bitching.  It's interesting to see the evolution of the insert though, watching each year as Topps tried to improve upon it.

Will Toppstown be missed?  I doubt it.  I won't miss it.  What about you?
Posted by cynicalbuddha at 11:41 AM