Sometimes living in Alaska can be a pain in the ass.  I had to go to Soldotna, about 144 south of Anchorage, for a meeting.  My boss and I elected to drive to save some money in our budget.  The drive down was OK, but coming back it got dicey coming over Turnagain Pass from the Kenai Pennisula. Ended up having a Alaska State Trooper escort us out of the pass, it was kinda cool, and I wasn't driving, but it made for a long day.  And last night was trade night.  I was really hoping to be able to post my box break this morning, but alas Bosco's didn't get any of their cards in. I ended up leaving empty handed. I'm proud of myself having so much self control. But I ended up stopping at Wal-Mart on the way home to see if they had 2012 out and they did.  Blasters, rack boxes, rack packs, and single packs.  I had 40 bucks worth of cards in my had and then after looking how long the checkout lines were put it all back.  Again I patted myself on the back for that self control.

This year's  Topps wrapper redemption you have to send in 14 jumbo or 50 regular wrappers.  That means I either had to buy two jumbos like I usually do and then what to do with the left over 6 wrappers or I had to buy a jumbo and 4 more jumbo packs   The last 3 years I've put together two base sets since I usually get so close with buying two jumbos.  And that's pretty much the only reason I did.  One of my 2012 collecting resolutions was to spend less.  So that means I'm probably only going to buy one jumbo and then 4 extra packs so I can send in my wrappers.  So guess what Topps you lose!  I'm buying less because of your increased wrapper demands.  And I'm sure that if you wait prices on Topps boxes will crash come March 1st when the wrapper redemption is over. That being said I'm sure I'll break down and buy a blaster and some rack packs too or maybe another jumbo after the redemption is done and prices come down that'll mean extras for trading!  I'll have my need list up, if I have any, after my break.  It might actually be a few days till I get my box now as I have plans through the Super Bowl, but I might have to make a quick pit stop in to get a box. 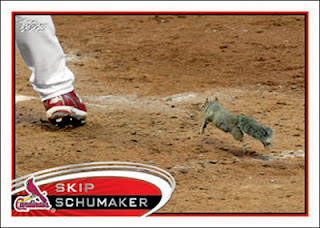 On the Squirrelmania front, prices have come down quite a bit from the first couple of auctions a few days ago, but the card is still going for over 100 bucks in most cases. The Pujols SP is another story. I only found a handful on my ebay search and only one was an auction and the starting price was $199. All the BIN ones are over 200 bucks.  Reyes is considerably less.  I haven't done an exhaustive search for other SP variations, but my advice if you looking to pick them up wait a few weeks.

Posted by cynicalbuddha at 9:53 AM