Asshole gets what he deserves 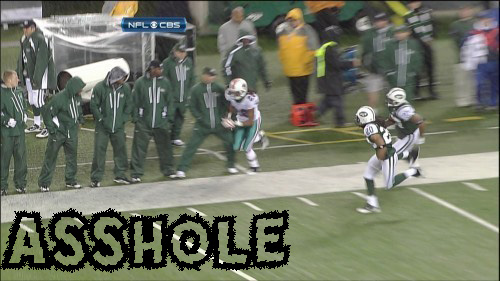 Well the NFL handed down a nice suspension and fine to Sal Alosi.  He's been suspended the rest of the season and any playoff games without pay and fined $25,000.  And I think he got off lucky.  What he did was inexcusable and I personally think if this is the kinda shit that the Jets are going to let happen he needed to be banned from the NFL altogether.  I was reading this terrible article over at Yahoo Sports, only because it's the only sports site I can access at work.

Couple things come to mind that really get my cockles up.  One this was malicious.  And I know that he apologized and everybody thinks that he was sincere.  Yeah sincere because the dumbass got caught and didn't realize he was being filmed.  Of course he's sorry he did it.  He's not going to come out and say he's not.  And it's great the Nolan Carroll can forgive him, but for me it's just another reason why the Jets are becoming one of my least favorite teams.  Two years ago I was rooting for them when they took Favre in.  I was still recovering from the aftermath of that whole soap opera.  I missed him, I still do, warts and all.  I can't just dump one of the best QB's of all time.  Prima donna and all.

I love that in the article they compared Alosi to Michael Vick.  That's so sad.  And while what Vick did was despicable it was on his own time and he was severely punished for it.  It didn't affect another player or an outcome to a game.  You may think that I'm being a little severe here but I don't think so.  And yes I realize that NFL seems to be really lax on players, especially this year.  The fight between Andre Johnson and Cortland Finnagan probably should have had some suspensions in it too.

I'm sorry but in a year dominated by Brett Favre penis, happened when he was a jet, DUI, Mr. Edwards, locker room indecency the Jets just look like and seem to act like a bush league team.  And that's too bad.  But Sal Alosi in my opinion is still and Asshole.
Posted by cynicalbuddha at 10:26 AM