Discovery Channel's Alaska not my Alaska 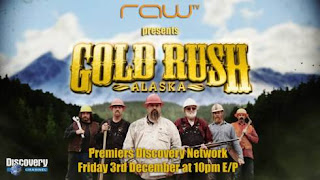 I almost called this post Cynicalbuddha's Alaska.
﻿
Lets be clear this isn't a sports related post this is a pissed off post.  Lets lay a little foundation so you can see where I'm at.  As many of you know, as I've blogged about it before, I live in Alaska.  I moved up here almost 13 years ago for work.  I was a fresh faced college grad with a fisheries biology degree and no job prospects in my native Wisconsin.  And believe it or not there is a ton, or at least was a ton of work for biologists up here.  So I like to think that after a decade it's pretty safe to consider myself an Alaskan.  My children will be Alaskan and I plan on staying here for a long time.  And while I just moved backed to Anchorage, which they say is as close as you can get to Alaska without being in Alaska, I like to consider myself fairly outdoorsy and wilderness savvy.

A few years back the Discovery Channel discovered Alaska could bring in big ratings much like sharks.  That's not surprising because I remember growing up Alaska always had that awe factor and remoteness.  I worked as a fisheries observer on commercial fishing vessels up here for over 11 years and there's a reality show right there.  I was around when the Discovery Channel filmed their show the World's Deadliest Job, which was the precursor to Deadliest Catch.  And at the time I thought that was a good idea.  Crabbers are the craziest MOFO's I know and it's an insane job.  Then came the first season of Deadliest Catch and I couldn't watch it knowing that they had to go out and fake scenes for the first season because the weather during the opener was the nicest it's been in 20 years.  Then the Discovery Channel does there Alaska Month of shows or was it week?  Seemed like a month.  That's great.  The state needs the tourism money and we actually like showing off out state.  It's big, it's wild, and there are lots of cool things to see.  Granted most people come up here on package deals and cruises and that's fine too.  I have to say that if you truly want to see Alaska you have to come up with a very loose agenda and enjoy yourself, listen to the locals they'll tell you where to go.  Little known fact you can't see Mt. McKinley from the National Park but you can from the State Park, if the clouds will let you. Oh and I forgot IRT, too, that is a crazy job, still how many episode can you watch of someone driving a truck on icy roads where it's really cold out?  Quite a few I guess.

And of course Alaska was shoved into the limelight when our ex-governor was nominated as a vice-presidential candidate in the last election.  Which led to more interest in the state.
Now she's got her own show and I have to apologize.  Sarah Palin's Alaska is not my Alaska.  And oddly enough most Alaskans don't really support her crazy agenda.  I've met Sarah Palin she came to Haines when I was living down there and I got her autograph, this was before the election and the nomination, she's very short and yes attractive in person.  I watch the first episode with my fiance and I said that's enough.  Please take everything you see on that show with a grain of salt.  It's produced!! Just like Deadliest Catch for maximum appeal.

Now there's a new show on the boob tube, Gold Rush Alaska.  This is filmed about 25 miles north of Haines in southeast Alaska.  And when I saw the previews I thought cool.  After watching the first 2 episodes I want to hurl.  First if you haven't seen the show it's stupid and all the "miners" are morons.  Here's the premise taken verbatim from Discoveries website:

"In the face of the economic meltdown, six men will risk everything to strike it rich mining for gold in the wilds of Alaska. Todd Hoffman of Sandy, Oregon, along with his father, are leading a group of greenhorn miners in search of the American dream and a new frontier. Gold fever is back, and the rush is on."

So instead of finding a group of experienced Alaskan miners we take 6 guys with almost no experience in mining or living in the wilderness and send them to Alaska where with a grubstake of about 150k they expect to strike it rich and save themselves from financial hardship.  OK now I realize that it probably did matter how much they picked out of the ground since there probably making a butt load from the show and merchandise, but historically gold mining is a losing proposition.

The local Haines paper had this story about the show.  hmmm $20,000 return on a $150,000 investment genius! And the guys are portrayed as such morons and dicks.  I'm kinda glad I wasn't around for filming this year.  I also like the comment on how lazy they were.  Typical made for TV drama.  I'm sure there will be a second season, I mean how many seasons of Deadliest Catch are there.  How many ways can you make the dangers of crabbing different  and interesting.  I guess quite a few.

And I've seen the previews for the new bush pilot show.  Those guys are crazy too.  And that's another deadly job.  I hope this one's a little more accurate.  At least with bush pilots like crabbers and ice road truckers you can't take novices and just throw them into a silly situation like you can wannabe gold miners.

whew.  Alright I'm done bitching.  My point was don't believe all the hype it's bullshit.  Although bears are real and they will eat your graham crackers!!

Now if you've never been to Alaska you should come.  If you want to take a cruise or buy the package deal I don't blame you.  But I highly recommend flying up here renting a car, or damn rent an RV.  I hate driving behind you in the summer but I understand the appeal.  Get a good guide book or travel guide and go.  Get a fishing pole and a berry bucket and enjoy.  It's unbelievable up here. From the Southeast with it's temperate almost Northwestern climate, to South central and the Kenai Peninsula and it's awesome salmon fishing to the Interior and North Slope with it's majestic mountains and tundra, oh and we have really big animals up here.
Some photo's from my work this summer.  I love my new job I got to go all over the state and access culverts for fish passage.


Alright enough everybody have a Merry Christmas, Happy New Year, Festive Kwanza, or whatever.﻿
Posted by cynicalbuddha at 10:38 AM