Did you ever have to read the The Jungle by Upton Sinclair?  Really?  It's a classic, it was all the rage back around the turn of the 20th century to muckrake, in depth investigative journalism.  I'm sure you read it. I was required to read it in high school.  But it was alright.  I mean it was gory and had all sorts of politically incorrect stuff in it, at least by modern day standards.  It laid bare the truths of the meat packing industry and gave way to stronger regulations and inspections on food production.  But I mean who doesn't want the extra protein of cockroaches?  What does this have to do with my post you ask?  Nothing.

I finally got around to borrowing a camera from work to take a few photos of the new house so I could post them on Facebook for the family but I just thought I'd post one here so you can see a before shot of the "man-cave" and I'll post an after when I get it done. 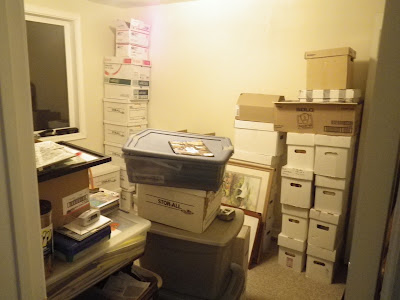 And sadly this is with me cleaning and moving a ton of stuff out already.  And you can't even see all the shit around the corner. Wow do I have a lot of shit.  Anywho I finally got rid of my storage unit and now I'm going to finally do the final walk through on the old apartment so that'll be done and I can concentrate on getting the new house organized.
cb out
Posted by cynicalbuddha at 9:46 AM