Can someone please tell me why Dale Murphy isn't a HOFer yet? 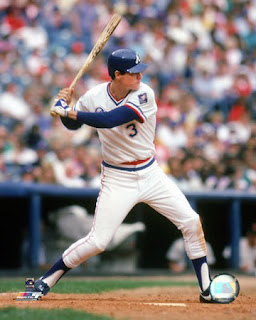 So I'm reading the blogs off the blog roll and scanning Yahoo sports, because it's the only sports site I can access at work and see that Pat Gillick was inducted into the Baseball HOF by the veterans committee.  I had no idea who this guy is so I did what I normally do and googled him. So OK whatever front office exec who lead 2 teams to 3 world series sounds good whatever.  But then I'm looking over the HOF website and see that the ballot is up for next years HOF class so as ignorant as ever I start reading who's up for the vote and I come across many a name from my youth but the one that sticks out is Dale Murphy and not that he's on the ballot but that this is his 13th year on the ballot, and yes Mr. Mattingly is on there too for the 11th time.

But come on.  Yes I realized he never went to a World Series but he's got great stats, lots of awards and accolades, was Mr. Clean in his career.

I get that he's not in the exclusive 3000 hit club or 500 Home Run club and near the end he wasn't all that productive and his final years with Philly and Colorado would best be forgotten but he was Mr. Brave for a good part of the late 70's and 80's.

Lots of good names on the ballot this year but I think it's time Dale gets put in.

So I know that there are lots of Brave fans out there with blogs.  I would love to know what you guys think. I know growing up in the 80's Murphy was a favorite of mine, along with Wade Boggs, Don Mattingly, Ricky Henderson, Will Clark, as well as, all my 80's Brewers.
Posted by cynicalbuddha at 1:30 PM