Some packs to drown my sorrows in....and a really nice hit.

I headed over to the LCS after watching my Packers take one up the butt to help ease the pain.  I bought 2 packs of Prime and 2 packs of Gridiron Gear.

For those of you who haven't seen any of the Gridiron gear this year here's what the bases looks like. 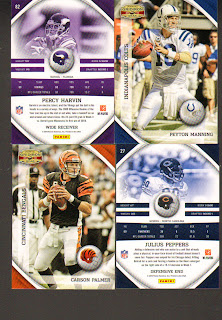 Through the years GridIron Gear was always one of my favorites from Donruss.  I always really like the super nice multi relic cards and autos. 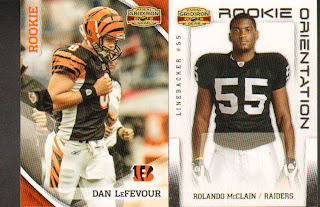 The McClain is numbered to 100, the LeFevour is not numbered.
My first pack of Prime yielded a nice numbered rookie and a Prime Rookie 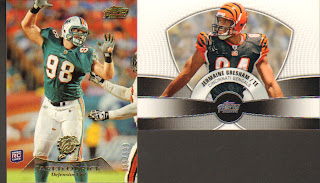 I've said it before and I'll say it again I really love the look of these cards, the base I mean.  Just a nice clean classic design with great photos.
Out of my second pack I've gotten my first book ever.

Only one card in this pack and it's a doosie.
Toby Gerhart sextuple relic auto numbered to 10!
Not that GridIron Gear ever had anything like this in it but it's the combination of different stuff on the card that I use to like Gridiron Gear for.  Not just jersey relics but a ball, wristband, glove and nice patch to boot.  I might hate the Vikings but I sure don't hate this card.  Wow.
cb out
Posted by cynicalbuddha at 5:02 PM