Week 16 Topps Rookie of the Week is... for reals this time

It's funny when Topps started doing the Rookie of the Week it was like clockwork that they would post it at 9 am my time.  I guess as the season winds down so does Topps in getting out ther ROTW.
Anyways Here is this weeks Rookie Redemption 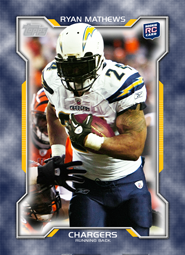 Ryan Matthews.  I forgot about this guy seeing he's been hurt for so long.
Here's what Topps had to say for there pick.
"Chargers running back Ryan Mathews looked strong in a week 16 matchup with the Bengals, totaling a career-high 83 yards from scrimmage and notching his fourth touchdown of the season. The Fresno State product reminded many why he was the No. 12 pick in this year's draft with an average of 4.6 yards-per-carry boosted by a 23-yard dash to the end zone."
What ever.  I still don't get Topps other than Mathews is probably more popular than Joe Webb.  But Joe's accomplishment was much better than Ryan's.  Joe won the game.  Mathews might have had a career rushing day,  and according to the stats he only gained 55 yards on 12 carries.  Like I said what ever.  I still think Joe Webb deserved rookie of the week and maybe if they had played on Sunday he might have gotten it.
cb out
Posted by cynicalbuddha at 12:52 AM