I have been making it my Sunday ritual after watching football at the bar to make a pit stop at Don's Sports Cards on my way home.  I like to peruse the drop board and look though anything new he has laying about.
Well if you didn't already know Topps Prime is out and I like it.  It reminds me of Stadium Club.  As a matter of fact I'm wondering why this isn't Stadium Club?  Why no Stadium Club Topps?  This of course is a mid level product with boxes going for about 100 bucks for 10 packs and packs going for about 10 to 11 bucks, although you can get a box of this off of Blowout for $76.  They come in a nice tube like Absolute.
I picked up 2 packs to try it out.

Here are 3 of the base cards. Mr. Stafford, Wallace and Smith.  Nice full bleed design with great photos, the name and team logo don't detract from the card at all.  I meant to scan the backs too but forgot there nice as well. 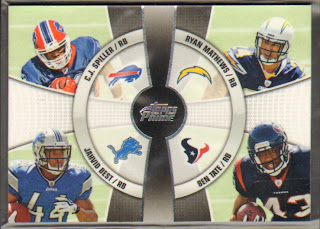 Each pack comes with 5 cards and at least 1 insert.  I got this quad Rookie running back card.  This card also has a relic versions where the team logos would be replaced by a piece of jersey. Oddly enough if you look at the sell sheet this is the quad 4th quarter example on the sheet. 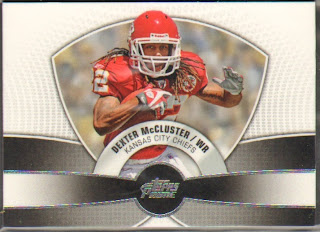 Another DMC card.  This card is called a Prime Rookie and has the PR prefix. I've been pulling lots of McCluster rookies this year.  Get healthy!!
I'm not sure but this might also have a relic or auto version. 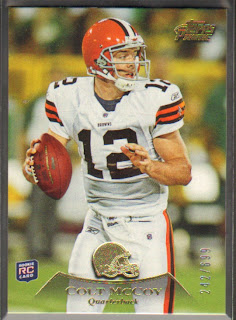 A nice Colt McCoy gold parallel.  I like this kid and I think if he can stay healthy and if the Browns can get a few more people to catch the ball and maybe shore up there line, and if Hillis doesn't pound himself into the ground, they might have a good season next year. 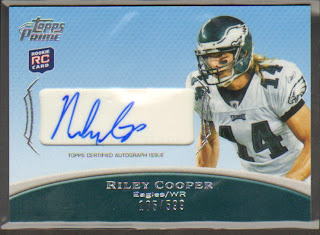 Another Eagle auto.  At least this kid made the team.  Although he's been hurt a lot too.  Sticker auto though.
If you were to buy a box you would be 4 hits.  2 Relics, 1 relic auto and 1 auto.  So I got the one Auto outta the box.  The book auto relics look pretty sweet too.
All in all I like the cards, I like the set, but way too expensive to try and complete from pack buying.  Although I stopped by Target to pick some stuff up after I left Don's and saw that they have rack packs of Prime for 4.99.  That could be a way to go.  With 150 base cards and getting 4 or 3 per pack (base cards) in a hobby pack that's just not going to do it, but 14 cards per rack pack or 28 for the same cost as a hobby pack.  I didn't pick any rack packs up but I might have to buy a few and see if I can pull a nice hit out of retail.  Oddly enough there seems to be some nice hits in the retail packs coming from Topps and Panini this year.
cb out
Posted by cynicalbuddha at 3:24 PM