Week 13 Topps Rookie of the Week

Keeping with my 17 part update of Topps Rookie of the Week, we have the announcement of Week 13's rookie. 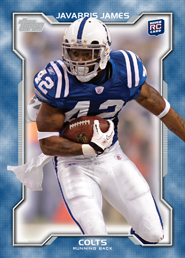 Javarris James
Here's what Topp's had to say about him...
"Colts running back Javarris James displayed his knack for reaching pay dirt in Week 13, rumbling for two touchdowns on just six carries against the Cowboys. The undrafted Hurricane product – cousin of former Indy star Edgerrin – has notched five scores over the last five games while emerging as his team’s feature goal-line back."
And there you go.  I even watched this game and hell it seems like all the Colts backs are named James so who knew this one was a rookie.  Well bravo Mr. James. Get your redemption at your local LCS and redeem at Topps.com.  I'm still working on a complete set.
See you all later
cb out
Posted by cynicalbuddha at 8:39 AM