Randomness in the Great White North

Well it's been a few days, I've been busy learning all sorts of cool jedi mind tricks to use on my subordinates next summer when I have subordinates.  I had to take a 2 day training course on being a supervisor, even though I've been supervising field technician for the last 4 years.  I think my boss just wants me to have to do all the evaluations.

Anyways I've said I was going to tone down my box buying for while since I'm buying a house but with Black Friday and tradenights come great deals and I couldn't pass up picking up a few cheap, and when I say cheap I mean cheap, boxes. 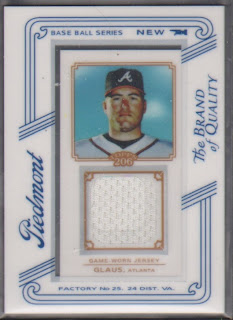 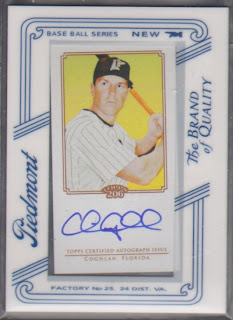 And a Chris Coghlan Auto. What I like about Topps T 206 auto's is that they're on card, what I dislike about them is there so tiny.
I also got a bunch of the hat variations ext.  Like a said pretty meh. But I've been trying slowly to finish the set and I got quite a few of the cards I needed out of this box.  I've got tons of extras if anyone else is trying too.
So I went to Bosco's on Black Thursday and then on Wednesday this week for trade night and they had some killer deals.  It was 10% off everything including super low marked down boxes.  So I picked up another box of Score Hockey and actually pulled a SSP Rookie Auto redemption card for Derek Stapan.  Sweet.  But again no snowglobe.  They must be rarer than 1 per box.  I couldn't find any odds anywhere and I threw away all my wrappers so if someone knows share.
I wasn't going to buy anymore Topps Football or Baseball Update but for 30 bucks a box it was hard to pass up.
I really would rather buy jumbo boxes of this stuff just because you get beter hits, but like I said cheap is cheap and I was jonesing for some redemption cards.
My one hit from the football box was this nice but ordinary Kellen Winslow jersey 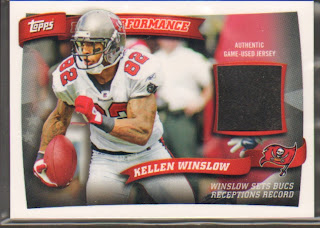 But all my Gridiron Giveaways were 70's cardboard exept for 1.
I did a little bit better with my box of update. 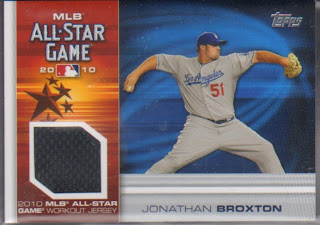 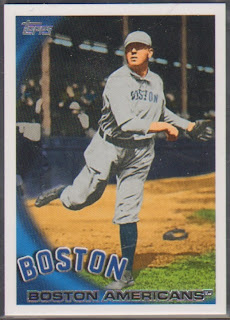 A Boston American variation card #220
and this little guy... 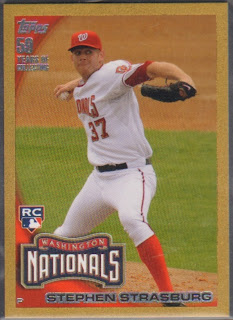 Where is Strassmania when I need you!!!!????!!! Yep that's a gold parallel #661 card.
Anyways I've decided to gamble and start stock piling Strasburgs in the event he comes back and is a super stud.  And I got some nice 50's cards in the million card giveaway.
I also dabbled and bought a couple of packs of Unrivaled.  Just to try something new. 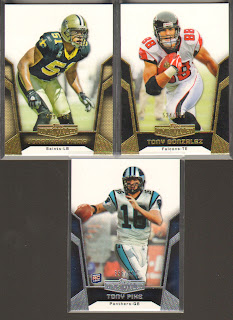 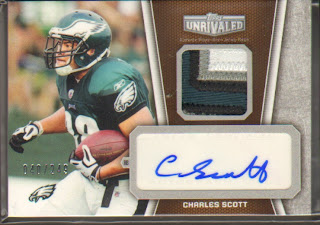 Look at the patch.  Look at the sig.  Nice. #d to 249.
Too bad it's a guy who isn't even playing in the NFL right now.
Poor Charles was drafted in the 6th round by the Eagles and then traded away to the Giants where he didn't make the team.  And this is one of those event worn jerseys not game worn.
Whew that was a long post and I probably could have broken it down a bit but what ever.  I'm going to take the dog for a walk and catch snowflakes on my tongue.  The blizzard of 2010 has started in Anchorage Alaska!!
Posted by cynicalbuddha at 1:48 AM